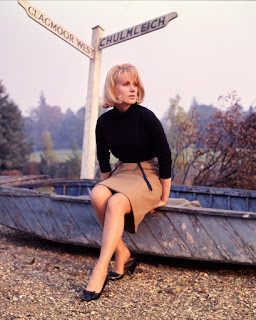 Another actress who was associated with Hammer Films has passed away recently--Jennifer Daniel, who starred in THE KISS OF THE VAMPIRE and THE REPTILE for the company.

Daniel was born in Wales and spent most of her performing career appearing on stage and television in England. She will be most remembered for her Hammer roles. My devotion (and weakness) for the Hammer ladies is well known, and Daniel was one of my favorites. Many of the Hammer ladies were so spectacular looking that it was hard to even conceive of them doing normal everyday things, but in her two roles for Hammer Daniel exuded a kindly, down-to-earth realism. You could say that she was the domesticated Hammer Scream Queen.

In THE KISS OF THE VAMPIRE Daniel plays Marianne Harcourt, a young wife travelling in Central Europe with her husband Gerald (played by Edward de Souza). The couple's automobile breaks down and they become the prey of Dr. Ravna (Noel Willman) and his "family" of vampires. Daniel's Marianne is not the usual all looks no brains female in danger, despite the fact that she is absolutely stunning in the red dress she wears during a party at Ravna's castle. Daniel firmly establishes Marianne as a sensible, loving wife and a decent person--which makes the scene of her spitting into Gerald's face while under the spell of Ravna all the more shocking. Daniel makes Marianne into someone the audience can truly care about.

In THE REPTILE Daniel plays another loving, sensible wife--Valerie Spalding, who moves to Cornwall with her husband Harry (Ray Barrett). Harry's brother has just died mysteriously, and the couple's investigations lead them to the menacing Dr. Franklyn and his strange daughter Anna (Jacqueline Pearce). Daniel ably portrays Valerie's care and concern for Anna's plight, without realizing that the girl turns into a snake-human hybrid (this is a Hammer movie, after all). THE REPTILE could even be seen as a kind of sequel to THE KISS OF THE VAMPIRE--the relationship between Valerie and Harry is very much like that of Marianne and Gerald, and once again Daniel is put in danger by Noel Willman. 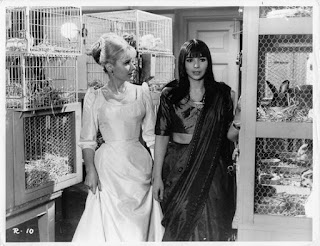 Jennifer Daniel and Jacqueline Pearce in THE REPTILE

The only Jennifer Daniel interview I have ever read was published in Richard Klemensen's LITTLE SHOPPE OF HORRORS issue #10/11. In it she seemed to appreciate her time at Hammer. A few years ago a Region B Blu-ray of THE KISS OF THE VAMPIRE was released, which had an audio commentary featuring Daniel and Edward de Souza. I do not have a multi-region Blu-ray player so I have not heard this commentary, but I would certainly have loved to know what she said during it. Jennifer Daniel was married to actor Dinsdale Landen for over forty years until his death in 2003.

Jennifer Daniel may not have the huge cult following that some of the other Hammer ladies, but she definitely made an impression on me. I'm mystified as to why she didn't have more of a big-screen career, and I'm disappointed that most of her TV work is unavailable in America.