Today is the birthday of actress Martine Beswicke. Nearly every movie Martine appeared in has a cult status attached to it, and she herself holds a high place among fans of genre cinema. With her unique exotic looks, you couldn't confuse Martine for any other performer. She also exuded a sense of danger about her--you felt that she could beat the crap out of you if she had to. She certainly wasn't the girl next door, and while this might have helped her obtain particular roles, it also may have limited her choice of parts as well.

I've always felt that despite the many memorable productions she was attached to, Martine's abilities were never fully taken advantage of. She was in two different James Bond films--FROM RUSSIA WITH LOVE and THUNDERBALL--but her roles in them were almost glorified cameos. She should have been a Bond leading lady, or a main Bond villain--heck, I think would she have been great as James Bond. When I watch all the big-budget comic book/action spectaculars of today's cinema, I'm constantly recasting them in my mind with the actors who were in the classic horror and science-fiction movies that I love. I can't help but think, "What if Martine Beswicke had been the Black Widow? Or what if she had been Wonder Woman?" The mind reels at such an enticing prospect. 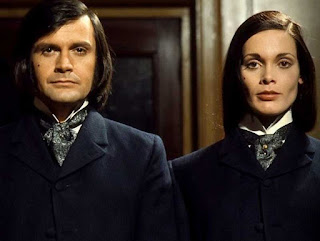 In late 1800s London, Dr. Henry Jekyll is obsessed with coming up with a universal cure for various diseases. Jekyll's friend, Professor Robertson (Gerald Sim), tells him that with all the testing and research that must be done to combat each individual disease, the doctor will be dead and buried by the time any real results happen. This bothers Jekyll so much that he shifts his researches into finding a way to prolong human life. Jekyll focuses on female hormones, since women live longer lives than men. He successfully changes a male fly's sex to female, and Jekyll eventually transforms himself into a female, but only for a short time. The doctor needs more female hormones to continue his experiments, but his "suppliers", who are none other than the notorious grave robbers Burke & Hare, are attacked by angry citizens. Jekyll starts killing prostitutes himself to obtain what he needs. Sister Hyde becomes more powerful each time she returns, and "she" complicates Jekyll's relationship with his upstairs neighbor Susan. Jekyll winds up being suspected of the Jack-the-Ripper like killings, and he tries to destroy the influence of Sister Hyde--but she winds up destroying him.

DR. JEKYLL & SISTER HYDE was written by Brian Clemens, and produced by Clemens and Albert Fennell. The two had worked on the famed British TV show THE AVENGERS during its most memorable seasons, and this film has much of the sly, witty attitude of that TV program. Clemens' clever reworking of Robert Louis Stevenson's famous tale goes beyond the typical Hammer formula. The writer integrates the legends of Burke & Hare and Jack the Ripper, but this factor doesn't seem contrived at all. The sexual aspects of the shift between Jekyll and Sister Hyde are portrayed subtly and effectively. There are violent murders here, but director Roy Ward Baker uses suggestion more than blood--DR. JEKYLL & SISTER HYDE is nowhere near as gory as most other horror films made around the same time. Baker and cinematographer Norman Warwick use a number of unusual camera set-ups to bring visual variety to a movie that has very few sets.

The transformation between Jekyll and Sister Hyde is handled very simply, without the use of complicated special effects. Some critics of the film have complained about this, but I believe any available FX of the time would have not held up very well (besides, Hammer probably couldn't have afforded a major FX sequence of this nature). What is important isn't so much the transformation, but the difference between Jekyll and Sister Hyde.

Dr. Jekyll, in this story, comes off as a misanthrope, far more interested in his experiments than in the humanity he is supposedly trying to help. His best friend Professor Robertson even calls him "a remote sort of fellow". Ralph Bates was an excellent actor, but he may have been too good--all of the characters he played for Hammer were very unlikable, and Dr. Jekyll is no exception. Jekyll is indecisive and morose, and when he engages Susan into a discussion about the morality of doing harm to individuals in order to effect greater good for the masses, he appears to be begging for an excuse to kill prostitutes in order to further his experiments. It's very hard to feel sympathy for this Jekyll.

As for Sister Hyde, she's confident, determined, and assured. She definitely wears the pants in the family. When Sister Hyde goes out to "collect" female hormones, she strides about the fog-shrouded streets with her head held high, and she even chooses to wear a magnificent red dress--there's no hide in this Hyde. Martine Beswicke obviously has the showier role here, but she makes the most of it. She's sultry, sexy, and devious, and she commands one's attention whenever she's on the screen. Poor Jekyll winds up looking unpleasant and uninteresting compared to his "sister". Hyde even seduces upstairs neighbor Susan's brother Howard, making one of the most bizarre relationship triangles in movie history. Susan (for whatever reason) is taken with Jekyll, and constantly goes out of her way to attract his attention. Sister Hyde seems to regard Susan with a mixture of contempt and jealousy--there are all sorts of theories one can discern from this, and I'll leave it to the readers to come up with their own ideas on it. (It does have to be pointed out that Ralph Bates and Martine Beswicke do bear a certain resemblance to each other, as you can see in the picture above.) 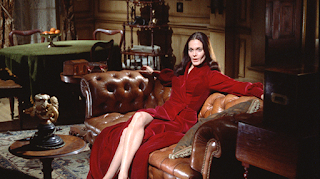 Sister Hyde in all "her" glory


There's more to this movie than just a gimmicky double act, though. It has a different feel and tone from the usual Hammer product. We don't see the expected supporting players, such as the Michael Rippers, etc. Gerald Sim does a very fine job as Professor Robertson. The Professor is the antithesis of Jekyll--he's a man who enjoys a good time, and he's always dressed rather smartly, and he's a bit of a rogue. Considering Brian Clemens' background with THE AVENGERS, I can't help but see a bit of John Steed in the character of the Professor. Despite his charm, the Professor is serious in trying to stop the Ripper-like murders--but he winds up getting seduced and killed by Sister Hyde, who knows how exactly to deal with her "brother's" friend. David Whitaker's music score has a very un-Hammer like feel to it as well--it has a romantic lushness to it, and at times it even sounds jaunty.

The one problem I do have with DR. JEKYLL & SISTER HYDE is the ending, which has Jekyll fleeing from the police and taking to the rooftops. Jekyll winds up hanging on the edge of a building, much like Jimmy Stewart at the beginning of VERTIGO. Jekyll begins to change into Sister Hyde, and he/she falls to the street below and is killed, with a face showing a grotesque combination of the doctor's two personalities. I personally would have preferred a more exciting climax...say Susan and Jekyll trying to have a personal moment and Sister Hyde bursting through and causing havoc. (Martine really should have been given a more notable exit.)

Nevertheless, DR. JEKYLL & SISTER HYDE is one of the better Hammer movies from the latter days of the company. One wishes that Brian Clemens had been involved in more features for Hammer--the only other production he did for them was CAPTAIN KRONOS: VAMPIRE HUNTER, another highly entertaining and underrated film that doesn't get as much attention as it deserves.

One also wishes that Martine Beswicke had been involved in more features for Hammer as well. She held her own alongside Raquel Welch in ONE MILLION YEARS B.C., and as for PREHISTORIC WOMEN/SLAVE GIRLS? Well....she looked spectacular as the Queen of the Amazons, but she didn't get to really do much in that movie. (The publicity stills of Martine for PREHISTORIC WOMEN are far more exciting than anything in the film.) Sister Hyde is from my viewpoint her signature role.

In the last few years Martine has become the immortal muse of my good friend, independent filmmaker Joshua Kennedy. The two have collaborated on a series of music videos that must be seen to be believed (they can be accessed on Josh's YouTube page). In 2018 Martine is scheduled to appear in HOUSE OF THE GORGON, to be written & directed by Josh and produced by Mark Redfield.