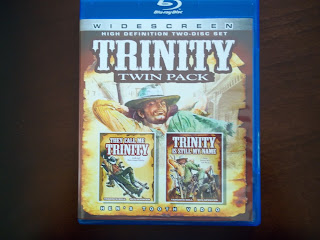 Hen's Tooth Video has released THEY CALL ME TRINITY (1970) and TRINITY IS STILL MY NAME (1971) on Blu-ray as a twin pack set. These are two of the most famous (or infamous, depending on your point of view) Spaghetti Westerns ever made.

Italian actors Mario Girotti and Carlo Pedersoli (better known under the names Terence Hill and Bud Spencer) had already been paired before in Euro Westerns, but it was the Trinity films that made them international stars. The blond Terence Hill, with his leading man looks, and the physically imposing Bud Spencer made a great team, and they would continue to make movies together into the 1990s. The writer and director of the Trinity films, Enzo Barboni (working under the name of E.B. Clucher) wanted to send up the Western format, and the movies were massively popular, especially in Europe. Many blame the Trinity films for starting the downward spiral of the Spaghetti Western, but the fact is that by the early 1970s the genre was already being hurt by over saturation of product.

Terence Hill plays ne'er-do-well Trinity, and Bud Spencer is his grumpy brother Bambino. In both movies the two men try to con and scavenge their way across the Old West, but their schemes fall flat as they wind up reluctantly coming to the aid of various folks instead. In THEY CALL ME TRINITY, Hill stumbles upon his brother posing as a sheriff in a backwater town. (The real sheriff was trying to bring Bambino in, but Bambino shot him and usurped the lawman's identity.) The brothers decide to help a group of peaceful religious settlers from being driven out by the town boss (played by Farley Granger, a long long way from STRANGERS ON A TRAIN).

TRINITY IS STILL MY NAME has the brothers visiting their parents (Harry Carey Jr. has a small role as the boys' Dad). The visit prods Bambino into trying to train Trinity as a "proper" criminal, but the duo become mistaken for a pair of federal agents, and they attempt to waylay the plans of a devious gun-runner.

The Trinity films have a legendary reputation, but I must admit that from my perspective, they don't hold up very well when viewed today. I find the movies more amusing than flat-out funny. Terence Hill does have huge screen presence, and while some might find his antics ingratiating, others may consider him exasperating. It's hard to get excited about a character whose main goal in life is to avoid any type of responsibility whatsoever. The main joke about Trinity is that while he's incredibly lazy, he has almost superhuman powers with a gun. Despite this the Trinity movies have very little gunplay (both films are rated G!). Most of the action, such as it is, involves the brothers getting into fistfights with numerous opponents. These fights are almost on a Three Stooges-type of level (the mountain-like Bambino beats up several men at once). I was actually more impressed with Bud Spencer than Hill--especially Spencer's Oliver Hardy-like reactions to all the events happening around him.

The style of the films are very much like the main characters themselves--they sort of meander along, without seeming to be in any of a hurry to get anywhere. Both movies have a running time of nearly two hours, and that's very long for material such as this. Enzo Barboni had been a cinematographer on a number of other Spaghetti Westerns, such as the original DJANGO, but for the Trinity films he leaves the camera on Hill and Spencer and lets them carry the load.

Hen's Tooth Video has put each of the two films in this set on its on disc. Each movie is presented in HD 2.35:1 anamorphic widescreen, and the transfers look fantastic. The audio on both films is in English (it sounds like it is the original English dubbing). There is not an Italian audio track on these discs, which will no doubt disappoint purists. Both discs feature a short photo gallery for each film. Both discs have an original trailer--the one for TRINITY IS STILL MY NAME is German. It's too bad that audio commentaries for the films were not included. The movies appear to be uncut--but when it comes to Euro Westerns, one can never be too sure.

The Trinity films are certainly not on the level of Sergio Leone--or Sergio Corbucci, or Sergio Sollima, for that matter--but Spaghetti Western fanatics will appreciate having official fine-looking Blu-ray versions of them.
Posted by Dan Day, Jr. at 1:06 PM