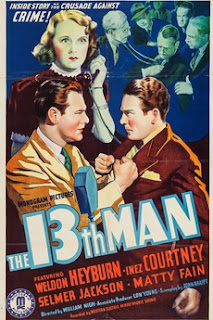 Not too long ago I met up with my friend Steve Zalusky at a Chicago White Sox game (needless to say, they lost). Steve is a huge film buff, and he suggested that I seek out a 1937 film called THE 13TH MAN. This 70 minute potboiler was the first release from the "new" Monogram Pictures, one of the most famous makers of B movies in the Classic Hollywood era.

A crusading District Attorney is running for re-election, and part of his campaign is a promise to add to the list of 12 public enemies he has put away. The D.A. promises to announce the indictment of a "13th Man" while speaking on newspaper columnist Swifty Taylor's (Weldon Heyburn) radio show. The D.A., along with Swifty, attends a prizefight...and seated in the audience are several folks who are candidates to be the 13th Man. The D.A. drops dead during the fight, apparently from heart failure...but the prosecutor was hit by a poisoned dart in the neck. Swifty is determined to find the killer, especially after his right-hand man, ace reporter Jimmy Moran (Milburn Stone) is also murdered during the investigation. With support from his long suffering secretary Julie (Inez Courtney), Swifty exposes the killer live on his radio show.

THE 13TH MAN features a number of elements that will be recognizable to movie buffs. The leading couple act like they can't stand each other, but they are really in love, there's a seemingly impossible murder, the story includes gangsters, goons, and scenes set in a swanky nightclub, etc. What hurts the film the most is the leading man, an actor by the name of Weldon Heyburn. In the book B MOVIES, the author Don Miller refers to Heyburn as a "Gable look-alike". Personally, I don't think Weldon looked much like the King of Hollywood--he certainly doesn't have Gable's natural charisma. Heyburn's Swifty is far too glib and obnoxious--the actor didn't have much of a movie career after this, and that's understandable.

Inez Courtney comes off far better as Julie. She's very cute and also funny, which makes it even more puzzling why her character would have major feelings for a lug like Swifty. (Courtney played a much dizzier dame in the 1935 THE RAVEN, alongside Karloff & Lugosi.) A very young Milburn Stone, who of course would go on to be best known as Doc on GUNSMOKE, does very well as the doomed Jimmy--Stone would have been a much better choice to play this film's lead. The script drops all sorts of hints that Jimmy is going to get offed--he's scheduled to get married to his secretary, and because the couple constantly talk about their bright future together, you just know that something is going to happen to the guy. (This subplot is a variation on the "police detective getting killed with one week left to retirement" trope.) The rest of the cast is made up of generic character actors that even I'm not familiar with.

THE 13TH MAN isn't an outstanding film, but it does have a few interesting quirks. The best scene by far is the D.A.'s death during the prize fight. As the prosecutor begins to feel the effects of the poison, the referee is counting out one of the fighters in the ring. Every time the ref says a number, we see one of the faces of the D.A.'s enemies who are sitting in the vicinity. When the ref gets to 10, the D.A. slumps over and dies. It's a finely edited sequence that stands out in this type of low-budget fare. THE 13TH MAN was directed by William Nigh, who cranked out dozens and dozens of these types of pictures during his prolific career--his name is mentioned several times in the FORGOTTEN HORRORS series of books. As a matter of fact, THE 13TH MAN is covered in FORGOTTEN HORRORS 2: BEYOND THE HORROR BAN.

The other notable thing about THE 13TH MAN is the climax, which has one of those "Gather all the suspects in a room and reveal the killer" scenes. This one stands out due to Swifty's announcing the murderer live on air in the same room. I actually guessed correctly who done it--but don't worry, I won't give out the culprit's name here. I watched THE 13TH MAN on YouTube--the quality wasn't too bad, but the main titles were missing.

I don't think THE 13TH MAN deserves major reevaluation, but it did remind me of the many TV crime drama episodes I saw as a kid in the late 1970s-early 80s. It's not meant to be an outstanding epic--it was designed to be program filler, and reliable entertainment. For what it is, it's not bad--but Weldon Heyburn and Inez Courtney won't make you forget William Powell and Myrna Loy.