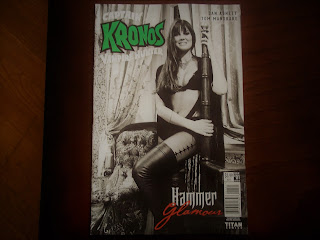 Titan Comics and Hammer Films have started a new comic book series based on the 1972 film CAPTAIN KRONOS: VAMPIRE HUNTER. For those not familiar with the movie, it tells of the adventures of a soldier who travels throughout 17th Century Europe seeking and destroying the undead. Written, produced, and directed by Brian Clemens, it is one of the best Hammer features from the company's early 1970s period.

Clemens once said in an interview that he felt Kronos was very much like a comic book hero, so it is fitting that the character is facing new adventures in this medium. The first issue begins with Kronos and his companions Professor Grost and Carla battling a vampire named Porphyr and his zombie horde. Kronos & Co. then travel to the village of Serechurch to face a new threat.

The comic was written by Dan Abnett, with art by Tom Mandrake. It's unrealistic to judge a comic series based on the very first issue, but I thought the story was more than satisfactory. The tone of this issue is a bit darker than the film--it also somewhat reminded me of the FLESH AND BLOOD series of graphic novels created by Robert Tinnell and Neil Vokes. Tom Mandrake's artwork is excellent, but his renderings of Kronos, Professor Grost, and Carla, who were played in the film by Horst Janson, John Cater, and Caroline Munro, have a vague resemblance to the actors instead of being perfect reproductions.

The one major difference between the comic book and the film is the character of Carla. In the movie Carla is a naive gypsy girl who Kronos takes along with him in his travels. The comic portrays Carla as having spent some time with the vampire hunter on his journeys, so now she herself is a dedicated and effective destroyer of the undead (she also has a far more impressive wardrobe than she did in the film). I have a feeling that this upgraded version of Carla was meant to bring a 21st Century strong female sensibility to the series. (The comic book Carla is still just as buxom as the typical Hammer leading lady, however.)

I have to admit that if I had not seen the alternate cover of the CAPTAIN KRONOS first issue (see above) when I walked into my local comic book shop, I probably wouldn't have purchased it. The picture is of course of Caroline Munro, and I'm sure some will point out that it's not even a photo from the CAPTAIN KRONOS movie--it's a publicity still from DRACULA A.D. 1972. But hey, the cover got me to buy the issue--so it did its job. (The first issue also has a couple other covers that feature traditional comic book art.) The issue also has a two-page spread detailing the origins of the Captain Kronos character, written by Hammer historian Marcus Hearn. The alternate cover and the two-page spread are a canny way to get Hammer Film fans interested in the comic.

It will be interesting to see happens in future issues of the comic. The first issue reiterated that in Captain Kronos' world, there are several different types of vampires who have different abilities, strengths, and weaknesses. This variety will be useful, since readers may tire of having the same characters kill vampires over and over again.
Posted by Dan Day, Jr. at 10:30 AM