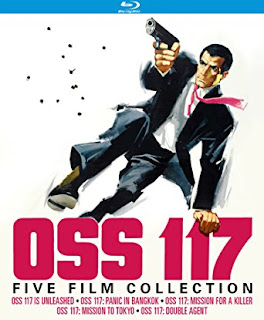 Kino Lorber's OSS 117: FIVE FILM COLLECTION set brings a series of Eurospy adventures to Region A Blu-ray for the very first time. The five movies in this set feature a character with the rather florid name of Hubert Bonisseur de La Bath. Despite the moniker, he's an American secret agent, code number OSS 117, created by French author Jean Bruce. Not only did OSS 117 make his literary debut before the first Ian Fleming James Bond novel, the character's first film was made before Bond's movie debut in DR. NO.

I had never seen these movies before, but I had read about them in an article a few years back in Tim Lucas' VIDEO WATCHDOG. I've seen a few Eurospy films, and I thought this might be a set worth having. After all, what is hard earned money for but to spend on obscure films the average person has never heard of?

The set presents five OSS 117 films from the 1960s spread over three discs. The first disc has two films starring Kerwin Mathews (THE 7TH VOYAGE OF SINBAD) as OSS 117: OSS 117 IS UNLEASHED and OSS 117: PANIC IN BANGKOK. Disc two has a pair of films starring Frederick Stafford (TOPAZ) as the secret agent. Disc three has OSS 117: DOUBLE AGENT, with John Gavin (PSYCHO) now playing the lead role. All the films are in French, with English subtitles. (I don't have a problem with subtitles, but this may dissuade some from buying the set.)

I would describe the movies as being "James Bond Lite". These productions are certainly not cheap--they were filmed around the world, using all sorts of remote and exotic locations. Just like 007, every woman OSS 117 happens to come into contact with is drop dead gorgeous, but any romantic entanglements are on a PG-13 type of level. The violence in these movies is PG-13 as well--there's a fair amount of action, but the films do not wallow in gore or unpleasantness. Surprisingly the OSS 117 movies feature more one-on-one fight scenes than they do major gunplay. In every movie OSS 117 has a knock-down drag-out fight with at least two or three different people, and these are staged very well--I would even say they are on the 007 level.

Many of the films actually anticipate future 007 productions in terms of locations, plot devices, etc. I'm not saying that someone who was involved in the Bond films ripped off the OSS 117 series--but the fact that there are so many similarities can't help but make one wonder.

What the OSS 117 films really lack when compared against the Bond series is the energetic pace of the 007 features. In the OSS 117 movies scenes have a tendency to drag on a bit too long, and dialogue sequences are far more prevalent. The OSS 117 films also all have jazzy-lounge type music scores, which I feel negate the suspense instead of add to it (There's no John Barry equivalent for OSS 117).

As for the actors who play OSS 117 in this set, there's not that much variation between them--they all come off as passable James Bond wannabes. If I had to make a choice among the actors, I'd pick Frederick Stafford, simply because he was in what I consider to be the best two movies in this set.

OSS 117 IS UNLEASHED (1963) has Kerwin Mathews sent to Corsica to investigate the death of a fellow agent. OSS 117 finds that the death has to do with a plot to undermine America's nuclear submarines. This film is the only one in the set that is in black & white, and it has a low-key, noir type of atmosphere to it--it kind of reminded me of a German Krimi film (especially with all jazz music in the background). This movie is presented in 1.66:1 anamorphic widescreen.

Mathews returns in OSS 117: PANIC IN BANGKOK (1964). The producers spent a lot more money on this one--it is in color and 2.35:1 widescreen, and OSS 117 spends most of his time in various Thailand locations, a decade before James Bond would in THE MAN WITH THE GOLDEN GUN. The plot focus here is on a sinister doctor who is developing a way to spread plague throughout the world. The ending has OSS 117 and his compatriots taking on the doctor's minions in a gun battle inside a old monastery. This movie is much better than OSS 117 IS UNLEASHED. I'll always think of Kerwin Mathews as Sinbad, but he did a very good job in his two OSS 117 outings (it would have been nice to hear his line readings, though).

Andre Hunebelle directed the first two films in the set, and he also helms OSS 117: MISSION FOR A KILLER (1965), which introduces Frederick Stafford as the secret agent. This is my favorite of the films, with OSS 117 traveling to Rio to find out who is behind the assassination of a number of world leaders. It has to do with a plant in the Amazon jungle that can force people to kill, and the evil group using it. There's several fine action scenes here, including a fight featuring a blowtorch, and a paratroop assault upon the evil group's base at the climax. This movie has a few things in common with MOONRAKER--the Rio setting, a fight inside an airplane, and the fact that in the Bond film Hugo Drax's scheme also involves Amazonian plants. This film is also in 2.35:1 anamorphic widescreen & color.

OSS 117: MISSION TO TOKYO (1966) predates James Bond's trip to Japan in YOU ONLY LIVE TWICE. Michel Boisrond directs this one, which has OSS 117 trying to stop a another evil group from using miniature jet planes to destroy U.S. military installations. The secret agent fights a sumo wrestler and a man wielding a samurai sword, among other threats. MISSION TO TOKYO is in color and 2.35:1 anamorphic widescreen.

OSS 117: DOUBLE AGENT (1968) introduces John Gavin as OSS 117 (the story even uses the idea of plastic surgery to explain the agent's changed appearance). OSS 117 infiltrates a nefarious organization (known cleverly enough as..."The Organization") who supplies assassins for various operations around the world. The agent travels from Rome to the Middle East, and three actresses known to cult movie buffs are showcased here: Margaret Lee (CIRCUS OF FEAR), Luciana Paluzzi (THUNDERBALL), and Rosalbi Neri (LADY FRANKENSTEIN). The head of "The Organization" is played by Curd Jurgens, who would go on to be the main villain in THE SPY WHO LOVED ME. This movie is okay, but it lacks the major action set-pieces of the earlier films. The disc cover lists the aspect ration for this film as 2.35:1, but it appears to be 1.85:1.

All the films in this set have excellent transfers. The only extras are three trailers located on disc three. (It would have been nice to have it least one commentary to discuss the OSS 117 character and the series in detail.) The back of the disc sleeve has a collection of stills and posters from the films.

I was pleasantly surprised by the OSS 117 set. These movies are not on the exact level of the 007 series, but they are not that far below it. If you've seen enough 1960s secret agent movies and TV shows you will be familiar with this material, but all the titles here are entertaining, and worth watching (and they all contain plenty of eye candy).
Posted by Dan Day, Jr. at 2:06 PM