THE LONG RIDERS On Kino Blu-ray 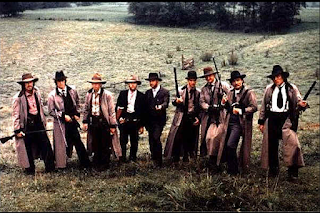 THE LONG RIDERS (1980) is one of the best Westerns made during the late 20th Century. It is another examination of the Jesse James-Cole Younger gang in post-Civil War Mid-America, but it is far more down-to-earth than the many other Hollywood tales about the group. What most remember about THE LONG RIDERS is that real-life brothers played the major roles--James & Stacy Keach as the James brothers, David, Keith, and Robert Carradine as the Youngers, Randy & Dennis Quaid as the Millers, and Nicholas & Christopher Guest as the Fords. While the casting is notable, it's more than just a gimmick. The prime movers behind this film getting made happened to be the Keach brothers, and it was their idea to have other acting siblings in the production.

THE LONG RIDERS was directed by Walter Hill, and he went out of his way to make the film not look like the typical American Western. In the extras on this Blu-ray, Hill states that the movie is actually a Midwestern, since it takes place mostly in Missouri. The members of the James-Younger gang had a farming background, and they were not cowboys. Most of the film was shot in Northern Georgia, and it has a green, pastoral look to it instead of a brown, desolate feel. Hill does not present the gang members as wronged Robin Hoods, or outright savages--he shows them as they are, and he doesn't try to explain or give some sort of reason for the gang's actions.

Even though James Keach as Jesse James is the nominal lead character, the movie is really an ensemble piece, and all the actors are given a chance to shine. You still feel that you don't get to know the members of the gang all that well (I think that may have been the director's intent). There's plenty of gunplay in THE LONG RIDERS, but Walter Hill, like his contemporaries Sam Peckinpah and John Milius, knew how to use action & violence for maximum impact, instead of today's directors who lay it on with a trowel. The climax, which features the gang's botched bank robbery in Northfield, Minnesota, is one of the best shoot-outs ever put on film. Instead of overwhelming the audience with action, Hill uses it at just the right time.

Special mention needs to be made of the music score by Ry Cooder--it is a score prized by soundtrack aficionados. Cooder's music is simple, but it is quirky, atmospheric and of the period. As soon as the movie starts and you hear Cooder's main theme, you know that this is not the usual Hollywood Western.

The packaging on this Kino Blu-ray claims that it is a brand new 4K restoration, and the transfer does look beautiful. There are two choices of audio--5.1 and 2.0, and both sound very robust. What really makes this Blu-ray impressive is the number of extras Kino has provided for it. There are so many  supplements, they are given an entire disc to themselves. There are brand new interviews with actors Keith Carradine, Robert Carradine, James Keach, Stacy Keach, Randy Quaid, and Nicholas Guest. There are also new interviews with Walter Hill, Ry Cooder, and producer Tim Zinnemann. An hour-long documentary on the making of the film is included, along with an anatomy of the Northfield Raid sequence, and a short piece where Walter Hill discusses his relationship with Sam Peckinpah. There is also an audio commentary with Howard S. Berger, Steve Mitchell & Nathaniel Thompson (I have not listened to this yet). The interviews are not just the usual "I loved working on this project" fluff--they are all worthy of viewing, and Walter Hill's remarks in particular about the making of the film are very enlightening.

It's nice to see an underrated film like THE LONG RIDERS get a Criterion-like treatment on home video. I personally believe it is the best film about Jesse James ever made.