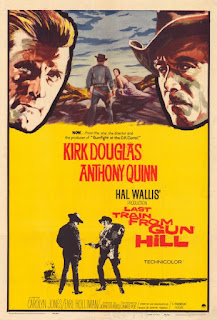 A couple years ago, I did a series of posts listing my top 100 movies of all time. When the list was completed, I was surprised to find out that three of the films on it were directed by John Sturges--THE MAGNIFICENT SEVEN, THE GREAT ESCAPE, and BAD DAY AT BLACK ROCK. Sturges gets almost no critical appreciation today--at least not in comparison with some of his contemporaries like Anthony Mann and Budd Boetticher.

The work of John Sturges should get more attention. He made tough, dramatic, suspenseful films about determined and serious-minded characters. Sturges was an expert in using unique outdoor locations, and he was a master at using widescreen. All of Sturges' films have an exemplary visual style. He worked with many of the biggest screen stars of the 1950s and 1960s, and he never failed to get great performances out of them.

A John Sturges Western that doesn't seem to be all that well known is LAST TRAIN FROM GUN HILL, released in 1959 and produced by Hal Wallis for Paramount. The movie stars Kirk Douglas and Anthony Quinn, and the story may remind some of HIGH NOON and 3:10 FROM YUMA.

Kirk Douglas plays Marshal Matt Morgan. At the beginning of the story Morgan's Native American wife is raped and killed by Rick Belden (Earl Holliman), the worthless son of cattle baron Craig Belden (Anthony Quinn). The elder Belden happens to be an old friend of Morgan's, which complicates matters...especially since the man happens to be the town boss of Gun Hill, which means that Morgan can expect no help when he travels to the town to bring in his wife's killer. Despite this, Morgan is determined to be on the 9 PM train out of Gun Hill, with the younger Belden in his custody. Morgan manages to capture Rick, and he takes refuge in the town hotel, surrounded by Craig's men. Whether or not Morgan is able to succeed makes for a taut and suspenseful climax.

I've always felt that the decade of the 1950s was the when the best Hollywood Westerns were made. These films were able to deal with social issues that movies set in contemporary times could not. LAST TRAIN ON GUN HILL tackles rape, murder, racism, and law & order, among other things. The assault and killing of Matt Morgan's wife takes place off-screen--all we heard is the woman's screams, which is unsettling enough. The fact that Morgan's wife was a Native American causes several people in the story to consider that the crime wasn't really all that serious. Morgan obviously hates Rick, but he doesn't just go ahead and kill him on his own--Morgan believes that as a U.S. Marshal he has a responsibility to bring the man in and have him go through the legal process. There's not a lot of gunplay or violence in LAST TRAIN TO GUN HILL--the dramatic tension between the characters is the main highlight. The best scene in the movie takes place in the hotel room where Morgan has Rick handcuffed to a bed. The Marshal tells his captive, in excruciating detail, exactly what happens to a man when he's hung. Kirk Douglas is darkly effective here--it's as if the Marshal's pent-up sadness and frustration is finally let loose. No one could do simmering anger like Kirk Douglas--but he still is able to show that Morgan is human enough to follow the letter of the law.

Anthony Quinn has the proper powerful screen presence to play Craig Belden. Belden and Morgan were great friends at one time, but the cattle baron's success since then seems to have changed him. Belden believes his power over the town of Gun Hill makes him (and his son) untouchable. Belden is a widower (the death of his wife probably has something to do with his present personality), but he does have a mistress named Linda (Carolyn Jones). Belden treats her as his personal property, and Linda winds up helping Morgan. Everyone thinks of Carolyn Jones as Morticia in THE ADDAMS FAMILY TV show, but she's excellent here as a woman who has had too many bad experiences. A young Earl Holliman plays Rick as a unlikable punk, but when you see him interact with his father you start to understand why he became that way.

LAST TRAIN FROM GUN HILL, is an exciting, atmospheric adult Western that wraps everything up in only 94 minutes. It's a movie that deserves more attention.