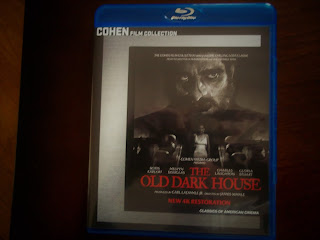 I've been looking forward to the Cohen Film Collection's Blu-ray of the newly restored THE OLD DARK HOUSE, and now that I've viewed it, I can say that it lives up to all my expectations. It is a magnificent restoration, and I'm not exaggerating in saying that watching it is like seeing the film for the very first time.

THE OLD DARK HOUSE was produced by Universal in 1932 and directed by James Whale. For many years the film was almost unavailable, and even today it is rarely shown on TV or cable. Universal doesn't even consider the film to belong to its lineup of Monster Classics, and technically that's correct. THE OLD DARK HOUSE is not really a horror film--it's more of a bizarre satire on English eccentricity (despite the fact that the abode of the title is supposed to be located in Wales). Boris Karloff may get top billing, but he doesn't have all that many scenes as the brutish butler Morgan. The real stars of the film are Ernest Thesiger and Eva Moore as members of the Femm family, who are forced to allow a group of stranded travelers into their Old Dark House during a terrific storm. Thesiger and Moore give two of the most quixotic portrayals ever seen in a movie made during the Hollywood studio era, and they not only outshine Karloff, they manage to overwhelm such performers as Melvyn Douglas and Charles Laughton as well.

James Whale was probably the most idiosyncratic movie director to work in 1930s Hollywood, and his patented combination of camp & creepiness is given full rein in THE OLD DARK HOUSE. I realize that there are a few film buffs that can't stand Whale and his work, but he's one of my favorite filmmakers. THE OLD DARK HOUSE is outlandishly theatrical, and it is not built around Karloff, but it is one of the best unusual films ever made.

THE OLD DARK HOUSE has been available on DVD from Kino, but the Cohen Blu-ray is miles ahead in visual quality. The increased sharpness brings out all sorts of detail--just check out the shimmer of Gloria Stuart's satin evening dress. We also get to see, more clearly than ever, Jack Pierce's make-up job on Boris Karloff. Most of Karloff's face here is covered in hair, but his character also looks to have been mauled by a ferocious cat. This Blu-ray makes one appreciate the atmospheric black & white cinematography of Arthur Edeson, and the production design of Charles D. Hall (the Old Dark House itself is as important a character as any member of the cast).

Most of the extras on this Blu-ray have been carried over from the Kino DVD--audio commentaries from Gloria Stuart and Whale biographer James Curtis, and a short talk with director Curtis Harrington, who was instrumental in preserving the film. There is a new interview with Sara Karloff, daughter of Boris, in which THE OLD DARK HOUSE is barely discussed.

I was hoping that there would be an extra on this disc detailing the new restoration of THE OLD DARK HOUSE....and there isn't. But that's a minor quibble. Cohen's Blu-ray of THE OLD DARK HOUSE makes the film look as fantastic as the recent Universal HD releases of their most famous Monster Classics. That alone makes this release a worthy purchase.
Posted by Dan Day, Jr. at 1:26 PM