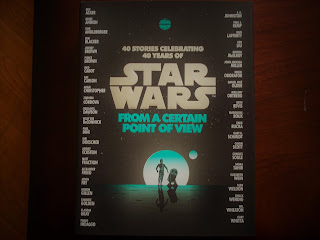 The latest title in the series of novelizations based on the Star Wars Universe is particularly noteworthy. STAR WARS--FROM A CERTAIN POINT OF VIEW celebrates the 40th anniversary of the original film by bringing together 40 different stories featuring the background characters of the story.

The chapters, each written by different authors, are arranged in roughly the same chronological order as the events in the actual film. The result is that reading this book is like experiencing the film through a series of deleted or alternate scenes. It's a brilliantly creative idea, and I hope that in the future THE EMPIRE STRIKES BACK and RETURN OF THE JEDI get the same treatment.

Among the characters showcased are Captain Antilles of the Blockade Runner, the bartender of the Mos Eisley Cantina, and even the creature in the Death Star trash compactor. We find out what Bail Organa and his wife were doing during their last moments on Alderaan, and we learn what it was like to stand at attention during the medal ceremony at the Rebel base on the Yavin moon.

My favorite chapter concerns a report written by Admiral Motti on the "incident" between him and Darth Vader in the Death Star conference room. This chapter does have a satirical bent to it....but it does kind of make you see Motti's view of the situation.

Your enjoyment of this book will be directly tied to how big a Star Wars fan you are. For someone like me, this volume is pure geek heroin. It also shows that a film as famous and as well-known as the original STAR WARS can still inspire artists to reveal new angles on it. Even if you have seen STAR WARS a hundred times, this book will make you want to watch it and think about it again.
Posted by Dan Day, Jr. at 9:03 AM