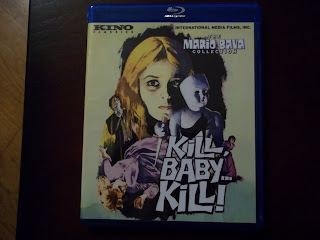 2017 has been a very good year for legendary film fantasist Mario Bava. It has seen two magnificent Region A Blu-ray releases of his work--CALTIKI, THE IMMORTAL MONSTER and ERIK THE CONQUEROR. Now Kino has come out with Bava's 1966 excursion into the weirdly macabre: KILL, BABY...KILL!

Many Bava aficionados consider KILL, BABY...KILL! his best work. It certainly is one of his strangest films (and that's saying a lot). It's not as well known as, say, BLACK SUNDAY....I don't ever remember it being shown on TV when I was a kid. The first time I had actually seen it for myself was when I bought the first Anchor Bay Mario Bava DVD set about a decade ago.

Set in 1907, KILL, BABY...KILL! has a doctor (Giacomo Rossi Stuart) arriving at a remote dilapidated European village to perform an autopsy. The village has been beset by a number of strange deaths, and the cause is the ghost of a seven year old girl, the daughter of the reclusive Baroness Graps. The Baroness is using the spirit of her child to exact revenge on the villagers. The doctor is convinced that the whole thing is nonsense, but his investigations lead him to the morbid Villa Graps where he learns how naive his skepticism is.

I've stated before that the movies of Mario Bava need to seen instead of written about, and that definitely applies here. A cursory description of the plot of KILL, BABY...KILL! does not do it justice. The story isn't really important...it's the visual atmosphere that Bava conjures up. Most of this movie was filmed at an actual crumbling Italian village, at night, and Bava turns the place into a gigantic haunted house. If you're looking for a story that makes narrative sense, KILL, BABY...KILL! is not for you. Bava eschews straightforward plotting and instead plays with time & space itself, resulting in a tale that plays out like a bizarre dream.

KILL, BABY...KILL! has very little gore or violence, but it does have one of the creepiest ghosts in movie history. The baleful stare of this little phantom has more impact that any fake blood. Bava made the ghost even more unsettling by having a young boy play the role in drag! The director's decision to do this may not seem all that important, but it shows Bava's visual ingenuity. 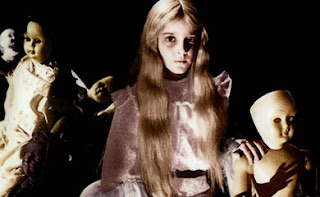 The creepy ghost of KILL, BABY...KILL!


Kino claims that its Blu-ray of KILL, BABY...KILL! features a print newly restored in 2K from 35mm elements. I have to say that the print does not look as colorful or as sharp as other recent Bava restorations...but it's probably the best version of the movie available. This is the English-language version of the movie (an Italian audio track with English subtitles is included). The main extra is a new audio commentary by Bava expert Tim Lucas. As usual, Lucas' talk is excellent, with encyclopedic detail on the production. A 2007 featurette has Bava's son Lamberto going back to the locations used for the movie. Lamberto Bava worked on the film as his father's assistant and he also recalls details of the shoot. There is also a short interview with one of the movie's stars, Erika Blanc. She looks back on the film with fondness (her stories about the boy who played the girl ghost are very amusing). A German title sequence for the film is included, which has alternate footage, and a international theatrical trailer and three American TV spots, which advertise the movie under one of its many alternate titles.

Mario Bava fans will certainly want to own this title on Blu-ray. KILL, BABY...KILL! is the ultimate example of Euro Gothic.
Posted by Dan Day, Jr. at 11:07 AM