TO THE DEVIL A DAUGHTER

Not that long ago I wrote a blog post on the 1969 Hammer Sci-fi film MOON ZERO TWO, since it was featured in the latest issue of Richard Klemensen's LITTLE SHOPPE OF HORRORS magazine. Another film was also featured in that issue--TO THE DEVIL A DAUGHTER, the very last Hammer horror film made in the 20th Century.

TO THE DEVIL A DAUGHTER was released in 1976, way after the English Gothic horror boom had ended. The movie was one of many attempts by Hammer head Michael Carreras to change the company's direction and make it more relevant to the changing tastes of film viewers. TO THE DEVIL A DAUGHTER had a very torturous and convoluted production history, which is definitively chronicled in David Taylor's article in LSOH #39. I won't go into the various details of what led up to the film, but considering the state of Hammer at the time, it's a minor miracle the movie got made at all.

TO THE DEVIL A DAUGHTER was based on a novel by English writer (and occult expert) Dennis Wheatley. Hammer had already adapted Wheatley's work before--their screen version of THE DEVIL RIDES OUT remains one of the company's best films--and they felt that using the author again might give them something akin to THE EXORCIST. TO THE DEVIL A DAUGHTER isn't anywhere near the same level as THE EXORCIST, or THE OMEN, which came out later in 1976. 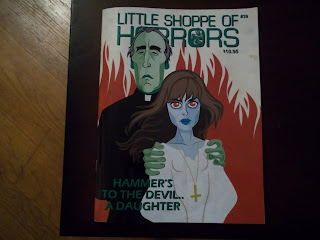 The front cover of LSOH #39, with artwork by Belle Dee


TO THE DEVIL A DAUGHTER has an excommunicated Catholic priest, Father Michael Rayner (Christopher Lee), attempting to create an avatar from the combination of a demon baby and a young nun named Catherine (Nastassja Kinski). At least...I think that's what Rayner is trying to do--the priest's evil plan is somewhat perplexing. Catherine's father (Denholm Elliott) asks best-selling occult author John Verney (Richard Widmark) to help his daughter. Verney is a bit skeptical, but he soon comes to find out that he really is dealing with dangerous dark forces.

The story of TO THE DEVIL A DAUGHTER is formatted much like a mystery--the audience finds out what is going on right along with the characters, and very little is explained. Some may contend that this gives the film a sense of unease, but personally I find TO THE DEVIL A DAUGHTER confusing to watch. The movie has a very abrupt editing style--a number of sequences seem to be leading up to something, and then the movie switches over to another sequence entirely. One of the writers on the film was Christopher Wicking, a man who penned a number of hard-to-follow horror films...but in his article David Taylor reveals that another writer, Gerald Vaughn-Hughes, was on the set almost everyday rewriting scenes with director Peter Sykes. (Taylor also explains that the film has very little in common with the novel that it is supposedly based on.)

One big problem with TO THE DEVIL A DAUGHTER is Richard Widmark. According to Taylor's article, the past-his-prime Hollywood star wasn't enthusiastic about making the film, and he didn't get along with most of the cast & crew. Watching the movie you can't help but notice how forlorn and uninspired Widmark looks...and I don't think it has anything to do with his character's feelings on battling Satanic evil. If the nominal lead of the film acts as if he doesn't want to be there...why should the audience?

Christopher Lee, as expected, is the best thing about the film. He's absolutely chilling as Father Michael...but instead of ranting and raving, he spends most of the story with a satisfied smile on his face, as if he's in a diabolic state of grace. Richard Widmark may have been the bigger mainstream name, but Lee was the real star here. Denholm Elliott is very good as Catherine's tormented father.

As for Nastassja Kinski, as Catherine....she's one of the main reasons it is hard for me to appreciate this film. It's not that her performance is bad, it's just...if you go by the most recognized date on the internet, Kinski was only 14 years old during the production of TO THE DEVIL A DAUGHTER. Kinski not only is present during a Satanic orgy in the movie, she also has a full-frontal nude scene. Kinski's supposed age is one of the many unpleasant things in this movie. I understand that the movie is supposed to be unpleasant--it has to do with Satanism, after all. But when it comes to horror films, I'm more drawn to Saturday afternoon creature features, or Gothic tales set in a European never-neverland. TO THE DEVIL A DAUGHTER is a contemporary film, and it's not comfortable to see a scene involving a woman being strapped down while giving birth to a demon baby (and dying because of the experience).

And then there's the ending to TO THE DEVIL A DAUGHTER. I won't give it away here, but it's rather anti-climatic...so much so, that you're liable to exclaim, "That's it???" One thing the ending does do, it brings down the entire history of 20th Century Hammer theatrical horror with a whimper instead of a bang.

There are a few Hammer fans who have come to appreciate TO THE DEVIL A DAUGHTER. For myself, I found reading David Taylor's article about the making of the movie was more entertaining than actually watching it. I don't believe that TO THE DEVIL A DAUGHTER killed off Hammer Films--I think the company was basically doomed no matter what they did. Director Peter Sykes tried to bring some atmosphere to it, and I do have to point out that Paul Glass' music is compelling, but even Christopher Lee can't overcome a confusing and mystifying script.