DEATH RIDES A HORSE On Blu-ray 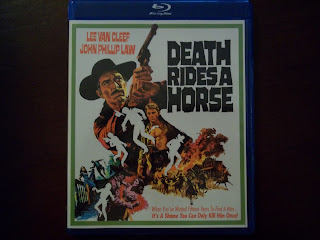 Kino Lorber has been releasing a number of renowned Spaghetti Westerns on Region A Blu-ray in the last few years, and now DEATH RIDES A HORSE can be added to the list. The 1967 Italian film stars Lee Van Cleef and John Phillip Law.

DEATH RIDES A HORSE begins with a harrowing sequence detailing the massacre of a frontier family by bandits. The only survivor is a young boy, and fifteen years later the now-grown Bill (John Phillip Law) seethes for revenge. Bill comes upon a link to his family's killers with the release from jail of the mysterious Ryan (Lee Van Cleef). Ryan has his own reasons to find the members of the murderous gang, and he and Bill form an uneasy partnership. The two men wind up besieged at the bandits' Mexican hideout, where a personal revelation further complicates matters.

Many Lee Van Cleef fans consider DEATH RIDES A HORSE to be the actor's best Euro Western not directed by Sergio Leone. The movie wasn't directed by Sergio Corbucci or Sergio Sollima, either....Giulio Petroni helmed this tale, and he did an excellent job. DEATH RIDES A HORSE has a lot in common with FOR A FEW DOLLARS MORE (Luciano Vincenzoni was a screenwriter on both films). The two movies feature flashbacks to a horrific event, two contrasting men after the same group of bandits for their own personal reasons, a climatic shootout at the villains' secret lair, and a major plot twist. The older and more clever gunfighter paired with a younger and more tempestuous character scenario would be a plot point in almost every Spaghetti Western Lee Van Cleef starred in. Van Cleef is perfect as the ultra-cool ex-con Ryan, and he acts as something of a mentor to the vengeance-obsessed Bill. John Phillip Law is very good as Bill, and it's surprising that he didn't appear in more movies of this type. I do have to say that there were times I felt that Law was trying to do a Man With No Name impression.

The supporting cast includes Sergio Leone veterans Luigi Pistilli and Mario Brega, and British character actor Anthony Dawson. It would seem unusual for a performer like Dawson to be in a Spaghetti Western, but he does get to participate in a well-staged gunfight with Law, one of the movie's best moments.

DEATH RIDES A HORSE has a few touches of sardonic humor, but overall it is a very grim affair. The opening sequence sets the tone for the rest of the film. Most of the outlandish flourishes one expects from a typical Euro Western are not to be found here. Ennio Morricone's magnificent but doom-laden score extenuates the dour attitude. Mention must be made of Carlo Carlini's cinematography and Eraldo Da Roma's editing, which are both superb.

Kino's Blu-ray of DEATH RIDES A HORSE presents the film in 2.35:1 anamorphic widescreen (for some reason the disc case says it is in 1.85:1). I wouldn't call the visual quality spectacular, but it's probably the best this movie is going to look on home video. The main extra is a audio commentary by independent filmmaker Alex Cox. He offers up a lot of info on the movie, comparing it to other Spaghetti Westerns, and he's quite knowledgeable on the locations used. There are a number of stretches where Cox doesn't say anything, as if he's caught up in watching the movie.

For those that do buy this disc (and I would recommend that you do), here's a helpful tidbit--when you get to the menu screen, Ennio Morricone's main theme for the film plays out in its entirety in full-bodied 5.1 audio.