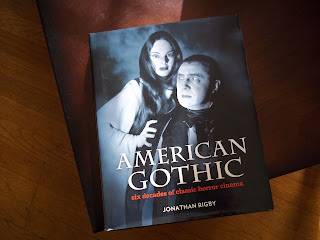 I've extolled the virtues of Jonathan Rigby's book ENGLISH GOTHIC several times on this blog. Last year saw the release of EURO GOTHIC, and now Rigby's AMERICAN GOTHIC has been re-released in a revised and expanded hardcover edition from Signum Books.

The first edition of AMERICAN GOTHIC came out about ten years ago in softcover. That version covered American horror films from the silent era to roughly 1956. The new edition adds a brand new chapter going up to 1959, right before the release of HOUSE OF USHER and PSYCHO. The book has the same clean efficient design as ENGLISH GOTHIC and EURO GOTHIC.

In the new AMERICAN GOTHIC Rigby singles out 111 different films for special coverage, and he briefly examines hundreds more. The volume is filled with black & white stills from the features discussed, and there are two sections of color illustrations. The book doesn't just deal with the famous usual suspects--many low-budget (and no-budget) independent films are included.

If you are any sort of a classic horror film fan, you've no doubt seen or read about most of the movies in AMERICAN GOTHIC dozens of times. Despite that, Rigby still is able to bring insightful analysis and dry humor to the subject. The author makes his points clearly, and avoids excessive plot synopsis. Rigby looks at the films chronologically, which allows him to place the titles in the context and times in which they were made.

The main thing that a reader takes away from AMERICAN GOTHIC is how much early 20th Century "old dark house"/mystery novels and theatrical plays influenced the development of the American horror film--a far greater influence than one might suspect.

I do wish that Rigby had continued the book into the 1960s, and reviewed the Roger Corman/Edgar Allan Poe film series. But there's still 384 pages here of entertaining and informative reading. The best compliment I can give to any film book is that reading it made me want to watch the titles discussed all over again--and AMERICAN GOTHIC certainly does that.

For those folks serious in learning about the history of horror films, any volume of Rigby's "Gothic Trilogy"--or better yet, all three--is essential. 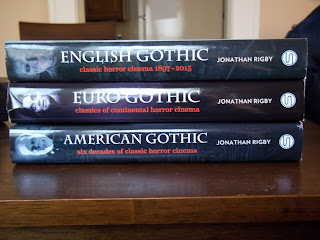