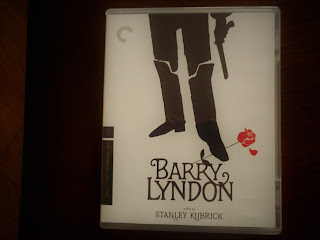 Criterion has pulled out all the stops for their Blu-ray release of Stanley Kubrick's 1975 historical epic BARRY LYNDON. An entire extra disc is needed for all of the extras.

BARRY LYNDON has never seemed to accumulate the kudos that more renowned Kubrick films have garnered over the years--films such as DR. STRANGELOVE, 2001: A SPACE ODYSSEY, and THE SHINING. It seems that appreciation for it has started to grow recently, however. BARRY LYNDON is one of the most sumptuously photographed movies ever made--you can literally freeze frame the disc at any point and wind up with an image that could be hung inside a portrait gallery. There were no sets used during the making of BARRY LYNDON, and the result is that the movie avoids the typical Hollywood history aspects of cinema set in the past. I'm no expert on late 18th Century Europe, but if I was able to go back to that time period and find out that it didn't look or feel like BARRY LYNDON, I'd be extremely disappointed.

If there is one particular thing about BARRY LYNDON that does not seem to jibe, it may be Ryan O'Neal's performance as the title character. When I first saw BARRY LYNDON I was convinced that O'Neal was miscast--that he was too American, too modern to portray an 18th Century opportunistic Irishman. I wondered how the movie would have been if someone who was more of an "actor's actor" had played the role....Malcolm McDowell, perhaps?

After seeing the movie a number of times since then I am now of the opinion that O'Neal was exactly what Kubrick wanted. O'Neal sticks out like a sore thumb...and that's one of the points of the film. No matter what situation Barry finds himself in, no matter how he is able to take advantage of his surroundings, the man simply does not fit in. He's an eternal outsider. He's also not very likable either, which doesn't make this film attractive for a mainstream audience (especially if you consider that it is three hours long). Most movie historical epics deal with famous (or infamous) real-life characters, or fictional characters who are involved in great events or deeds. Barry does take part in the Seven Year's War, but that's really a minor incident in his story. Kubrick isn't interested in big exciting moments here--he's more concerned with observing Barry and whoever or whatever he comes across. Some may find BARRY LYNDON to be cold and remote, but that could be said about every Stanley Kubrick production.

Nearly every aspect of BARRY LYNDON is explored on the extras disc in this Criterion Blu-ray--photography, production design, costumes, music, editing, sound, etc. Watching all these extras only made me want to know even more about the film. Criterion also provides a 42-page booklet which has an essay on the film by Geoffrey O'Brien and reprints two different articles on the film's visuals from AMERICAN CINEMATOGRAPHER magazine.

Criterion presents BARRY LYNDON in 1.66:1 anamorphic widescreen, and in my opinion it looks even better than the Warners Blu-ray of the film that was released a few years ago. Two soundtracks are provided--mono and an alternate 5.1 surround mix.

Stanley Kubrick was one of the greatest--and most meticulous--filmmakers of all time. Every single second of BARRY LYNDON reinforces that. Criterion has come out with editions of a number of Kubrick's films, and since next year is the 50th anniversary of 2001, I can't help but hope that the company will do the ultimate release of that classic.