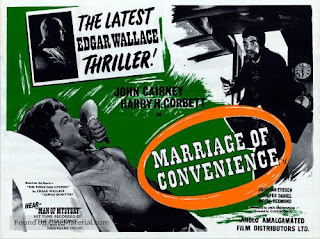 A couple months ago one of my favorite Hammer actresses, Jennifer Daniel, passed away. In the blog post I wrote about her as a tribute I lamented how much of Daniel's on-camera work is unavailable to Americans. Recently I was on YouTube and I happened to stumble upon a film called MARRIAGE OF CONVENIENCE, a 1960 British crime drama starring Jennifer Daniel. The production also features a number of performers who would have or already had links to Hammer Films: John Cairney (THE DEVIL-SHIP PIRATES), Moira Redmond (NIGHTMARE), and John Van Eyssen (HORROR OF DRACULA).

MARRIAGE OF CONVENIENCE was part of a series of black & white low-budget mystery stories based on the work of famed writer Edgar Wallace. These films were made at the Merton Park Studios by Anglo-Amalgamated, and they were released in the U.K. as second features. In America the films were shown on syndicated TV as EDGAR WALLACE MYSTERY THEATER. I'm familiar with the series of German "Krimi" films adapted from Edgar Wallace, but I must admit I had no knowledge of the British series.

I can only judge the British Edgar Wallace films from my viewing of MARRIAGE OF CONVENIENCE, but according to my internet research on the series, the individual entries were very similar. While the German Edgar Wallace films contained such elements as science-fiction, horror, and fantastic adventure, MARRIAGE OF CONVENIENCE is much more down-to-earth.

The story concerns Larry Wilson (John Cairney), a young man who is serving time for a bank robbery. Larry sets up a fake marriage to the daughter (Jennifer Daniel) of a former cell-mate--this enables Larry to be let out (under police supervision) for the ceremony. Larry manages to escape and hide out at his ex-cell-mate's house. Larry plans to visit his girlfriend (Moira Redmond), who has been hiding the money from the bank robbery...but the wanted man finds out that the woman is now married to the Inspector (John Van Eyssen) who put him in jail! Larry rightfully assumes that his girlfriend and the retired Inspector are sharing the loot, and he sets his sights on tracking them down and getting revenge...but Larry has someone on his trail--another police official (Harry H. Corbett) who is determined to bring him to justice.

It's easy to see from watching MARRIAGE OF CONVENIENCE why the British Edgar Wallace series was shown on American TV. MARRIAGE OF CONVENIENCE is about an hour long, and it was filmed by director Clive Donner in a very straightforward, no-frills manner. The story has no overt violence or provocative situations--it reminded me very much of a typical 1960s TV episode. John Cairney brings a lot of intensity to the desperate, hotheaded Wilson, but it's hard to feel any sympathy for him. Jennifer Daniel very capably fills out the "nice girl" role--while watching this I kept thinking that her character was too sensible to be involved in Larry's schemes, and sure enough, she winds up telling all to the police. John Van Eyssen is quite smarmy as the crooked Inspector, but Harry H. Corbett makes the biggest impression as the dogged "regular guy" detective who solves the case.

I certainly wouldn't call MARRIAGE OF CONVENIENCE a spectacular discovery--from my point of view it's interesting for the cast more than anything else. The poster that you can see above is probably more exciting than anything that happens in the film. I would be interested in seeing more entries from this British Edgar Wallace series--since they were all made in the early 1960s I'm sure there are several Hammer veterans involved in them. For me the main draw here was seeing Jennifer Daniel. She's as beautiful as she was in her Hammer roles, but unfortunately she really doesn't get much to do here.
Posted by Dan Day, Jr. at 12:48 PM