THE MERCENARY On Blu-ray 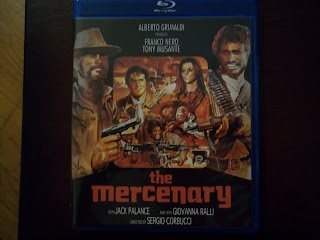 Kino Lorber adds to their growing collection of fine Spaghetti Western Blu-ray releases with THE MERCENARY, a 1968 film directed by Sergio Corbucci. (The movie is also known as A PROFESSIONAL GUN.)

This is one of the many Euro Westerns set during the Mexican Revolution of the early 20th Century. Paco Roman (Tony Musante) is a peasant mine worker who leads a revolt against his bosses. Paco encounters gun-for-hire Sergei "The Polack" Kowalski (Franco Nero), and the mercenary helps the peasant become a revolutionary hero. Paco's continued reliance on Kowalski annoys determined rebel Columba (Giovanna Ralli). Despite her frustration Columba is in love with Paco, and she convinces him to turn against Kowalski....but the revolutionaries find out that fighting for the people is a lot more complicated than they think.

THE MERCENARY features a typical Spaghetti Western situation with a cool, calculated gringo paired with an emotive, rough-edged Mexican national. Franco Nero brings his usual charismatic screen presence to the role of Kowalski, and he carries the film. Tony Musante is okay as Paco, but this is the type of role would be better suited for Tomas Milian. (When Sergio Corbucci basically remade THE MERCENARY a few years later as COMPANEROS, he cast Milian alongside Nero.) Giovanna Ralli looks more like a fashion model instead of a Mexican peasant woman, but her character of Columba happens to be the most interesting. She's totally committed to the revolution, and she points out time and again how Paco is basically subservient to Kowalski--yet at the same time Columba is in love with Paco and stays loyal to him no matter what. The interaction between Paco, Kowalski, and Columba is what sets THE MERCENARY apart from other films of its type.

Jack Palance also appears in this movie, as the very strange Curly, another gun-for-hire who works against Kowalski and the revolutionaries. Just like Franco Nero, Palance would play a variation of his THE MERCENARY character in COMPANEROS.

THE MERCENARY isn't as nihilistic as other Corbucci films such as DJANGO and NAVAJO JOE, but it still has plenty of violent action. This movie also appears to have a bigger budget than the usual Corbucci picture, and they may be due to it being produced by Alberto Grimaldi. Because of the Mexican Revolution aspects of the story many have called THE MERCENARY a "political" Western...but I can't say that I agree with that. Paco and his followers are basically a rag-tag group of bandits, and what success they do have is owed almost entirely to Kowalski. Paco is constantly having his hide saved by the white European mercenary, even at the very end of the film. Nero's Kowalski is only interested in making money off of whatever situation he winds up in--he even demands that Paco draw up a contract for his services, a contract that includes bonuses and perks! The "people" are not presented all that sympathetically in THE MERCENARY. If anything, I think the film is rather sardonic toward the left-wing politics of the late 1960s. (The script for THE MERCENARY was written by Euro Western veteran Luciano Vincenzoni.)

Kino presents THE MERCENARY in 2.35:1 anamorphic widescreen, and the movie looks very fine. An audio commentary is provided featuring Alex Cox, who shares his extensive knowledge on the Spaghetti Western genre. A couple of animated image galleries are included, and these are backed with selections from the movie's music score by the brilliant Ennio Morricone and Bruno Nicolai.
Posted by Dan Day, Jr. at 10:23 AM