SECRET OF THE CHATEAU 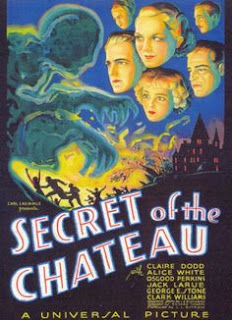 My recent internet ramblings led me to stumble upon a 1934 Universal "B" movie called SECRET OF THE CHATEAU, a murder mystery that isn't all that thrilling or mysterious.

The story is set in France, although none of the cast go out of their way to act particularly French. A quirky Inspector named Marotte (Ferdinand Gottschalk) is determined to catch a criminal mastermind who steals rare artifacts, despite not knowing who the culprit is or what he or she may look like. Marotte attends an auction of items from a recently deceased aristocrat's estate, where he encounters Julie Verlaine (Claire Dodd), a woman who he had sent to jail for document theft. The late aristocrat's nephew Paul (Clark Williams) arrives at the auction and lets it be known that his uncle has an original Gutenberg Bible at the family chateau. Julie, the Inspector, and sundry other suspicious characters gather at the chateau, drawn by the priceless tome.

I figured that since SECRET OF THE CHATEAU was produced by Universal, it would have some of the characteristics of that studio's other 1930s thrillers. But director Richard Thorpe stages things in a routine, uninspired manner--this movie looks as if it could have been made at any low-budget studio of the period. One expects the chateau referred to in the title to be presented as atmospherically as possible, but the indoor sets are rather generic. The identity of the criminal mastermind isn't all that hard to figure out (it was the character I suspected the most).

The most interesting thing about SECRET OF THE CHATEAU is its leading lady, Claire Dodd. She appeared in numerous Pre-Code Hollywood films of the early 1930s, and almost always she was the "bad girl" or the "other woman". She almost never got to play leading heroine roles. (She did play Della Street in some of the 1930s Perry Mason movies.) Here she does get lead billing, but her character still isn't exactly on the square--she has a criminal record, and she's egged on by her partner-in-crime to try and steal the Gutenberg Bible. (She does have a change of heart in the end, though.) Dodd was a very elegant looking woman and in her roles she always seemed to have a formidable attitude. It's nice to see her as a leading lady but in all honesty she doesn't get much of a chance to shine here. Dodd would later return to Universal and appear in the 1941 version of THE BLACK CAT with Bela Lugosi and THE MAD DOCTOR OF MARKET STREET with Lionel Atwill. 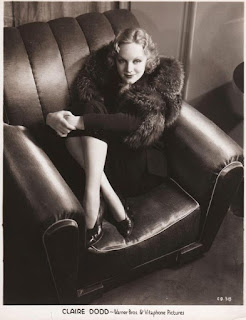 The Universal thrillers of the 1930s usually had a stock supporting cast of great character actors, but unfortunately that's not the case here. The movie does feature another Pre-Code cutie, brassy blonde Alice White, and Osgood Perkins, the father of Anthony Perkins, is also in the cast. Ferdinand Gottschalk (there's a name for you) does make an impression as the boastful Inspector.

SECRET OF THE CHATEAU belongs in the "Forgotten Horrors" category, and you really have to be a geeky film buff to want to sit through it. The poster that is at the beginning of this post is more exciting than anything that happens in the film.
Posted by Dan Day, Jr. at 1:52 PM