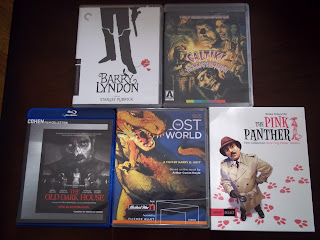 Once again it's time for me to list my top five movie home video releases of 2017. Last year I had trouble coming up with a top five, but this year I could have easily increased this list to ten. And there was plenty of appetizing offerings I didn't purchase--I do have to eat and pay bills, you know.

I've been hearing for the last few years about the "death" of physical media...yet 2017 saw a slew of prime cult home video product. There's a definite market out there for this sort of material, and companies like Arrow, Shout Factory, Severin, and Kino are doing a wonderful job of filling it (and getting a huge chunk of my hard-earned cash in the process). I don't stream (or even field & stream), but I've got discs piled up all over my house, and that's just the way I like it.

As I do every year, I must point out that I purchased all my picks, and that they are all Region A or Region Free.


1. BARRY LYNDON (Blu-ray) from Criterion
Stanley Kubrick's historical epic looks magnificent, and according to Criterion, it is in the correct aspect ratio. What made me choose this as #1 is the fact that this release provides an entire separate disc of extras, thoroughly analyzing the making of the production. I wrote a full review of this in October.

2. CALTIKI THE IMMORTAL MONSTER (DVD/Blu-ray) from Arrow
2017 was a very good year for fans of the Italian Maestro of the fantastic, Mario Bava. His films ERIK THE CONQUEROR, KILL, BABY...KILL!, and ROY COLT AND WINCHESTER JACK all received high-end releases. Arrow's version of CALTIKI makes the list due to its giving a public domain title the respect and extras a major mainstream picture would garner. My review of it was posted in May.

3. THE OLD DARK HOUSE (Blu-ray) from Cohen
James Whale's quirky tale of British eccentricity has been given a splendid restoration on this disc, and that fact alone is enough to put it in my top five. I covered this release in October.

4. THE LOST WORLD--1925 version (Blu-ray) from Flicker Alley
Another splendid restoration of one of the most influential fantastic films ever made, jam-packed with pertinent extras. My full review of it was posted in October.

5. THE PINK PANTHER FILM COLLECTION (Blu-ray) from Shout Factory
For the first time ever, all the Pink Panther films starring Peter Sellers are included in one set. All six of the films gets its own disc, with numerous extras covering each production. I've never written a proper review of this because I still haven't gotten to most of the extras yet!
Posted by Dan Day, Jr. at 7:52 AM