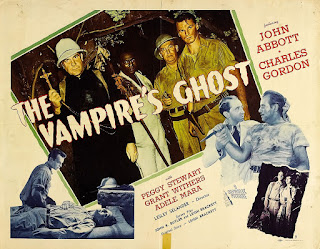 THE VAMPIRE'S GHOST (1945) is one of the few horror films produced by Republic Pictures, a studio better known for Westerns. Olive Films has recently released the movie on home video, and believe it or not, I had never seen it before. It is an unconventional vampire tale, and one that I found surprisingly effective.

THE VAMPIRE'S GHOST has very little in common with the other low-budget Hollywood monster flicks made around the same time. It is set in Africa, in contemporary times, instead of a Gothic European location. The cast does not feature any familiar names such as Lugosi, Carradine, Atwill, or Zucco. The story takes place in the fictional town of Bakunda, where a number of mysterious deaths have upset the natives. As you have no doubt guessed, the victims were drained of blood, and there were two tiny punctures in their necks.....

Local plantation official Roy (Charles Gordon) is determined to find out who is behind the murders, and he decides to ask the owner of a waterfront bar, Webb Fallon (John Abbott) if he has any information. The quixotic Fallon has not been in Bakunda long, but he already has knowledge of the seamier aspects of the town. While out on a jungle expedition with Fallon, Roy finds out that the man is a vampire! Fallon puts Roy under his spell, and prevents the man from disclosing this information. There's another reason why Fallon zaps Roy....the undead creature is interested in the young man's pretty fiance, Julie (Peggy Stewart). With help from a missionary, Roy battles against Fallon's dark powers.

John Abbott, a plain-looking and slightly built English character actor, might seem miscast as a vampire. He sure isn't Bela or Chris Lee--but I found his performance kind of refreshing. Webb Fallon's vampiric tendencies are more subtle than the usual cinematic bloodsucker. He doesn't wear a cape or evening dress--ironically he spends most of the movie in a white tropical suit. Fallon even goes about in the daytime when he has to, with the help of sunglasses. He does appear to have superhuman strength (at one point he makes short work of a bunch of toughs during a barroom brawl) and like most of his undead movie brethren he can hypnotize someone within seconds. Instead of coming off as an evil supernatural creature, Fallon gives the impression of someone who is suffering from a curse and is unable to control his actions. Despite his affliction Fallon tries to live a "normal" life (if hiding out in a backwater African town and running a shady dive can be considered normal), and every so often he wistfully reflects on the sadness of eternity. I would even go as far to say that the character of Webb Fallon anticipates other sensitive vampires found in DARK SHADOWS, the Anne Rice novels, and the TWILIGHT series.

The rest of the cast is rather mediocre, except for Adele Mara, who plays an exotic dancer who works in Fallon's establishment. Director Lesley Selander does create a few atmospheric sequences, and since the running time is only about an hour long, the movie doesn't wear out its welcome. This is very much a low-budget production, with the expected studio jungle settings. The native African characters are portrayed just about the way you would expect in a American film made in 1945.

The original story of THE VAMPIRE'S GHOST was provided by Leigh Brackett, who also co-wrote the screenplay. As a writer Brackett worked on some of the most famous films ever made, such as THE BIG SLEEP, RIO BRAVO, and THE EMPIRE STRIKES BACK, among others. She deserves credit for coming up with a vampire story that stands out from pack of 1940s Poverty Row horrors.

THE VAMPIRE'S GHOST has apparently never had an official home video release before. The picture quality (the movie is in black & white) is very good. As usual with Olive, there are no extras whatsoever. I purchased the DVD version of THE VAMPIRE'S GHOST (Olive has also released a Blu-ray version).

I must admit that the main reason I liked THE VAMPIRE'S GHOST so much was that I had never seen it before. When you've seen as many old monster movies as I have, and you've seen them so many times over, you can't help but be intrigued with something that shakes the expected format up a little. I wouldn't say THE VAMPIRE'S GHOST is a great film--but it is a nice little "B" picture that deserves some attention.