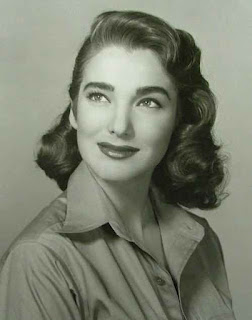 The passing of Julie Adams is a truly sad event for many film buffs. As anyone who met her can attest, she was a gracious individual who went out of her way to treat anyone who approached her feel special.

I met Julie Adams at the 2014 Summer Monster Bash Conference. She was as nice as a person could be. My main regret is that I really didn't get a lot of time to talk to her, because there were so many people gathered around her table and I didn't want to be "that guy" who takes way too much of her time.

Julie Adams will always be remembered for THE CREATURE FROM THE BLACK LAGOON, which is a bit unfair. She had a long and very accomplished acting career, in which she worked with the likes of John Wayne, James Stewart, Tyrone Power, Charlton Heston, Rock Hudson, Glenn Ford, and even Elvis Presley. She also guest-starred in most of the more remembered classic TV shows of the period. It was television that gave her a chance to show off her acting range. The majority of her film roles were "nice girl" parts, but TV allowed her to play duplicitous characters on such shows as THE RIFLEMAN, BONANZA, and THE BIG VALLEY.

I've often wondered why Julie Adams never became a major, major star. She certainly had the looks and the dramatic talent to be one (I'd venture to say she was one of the most beautiful American actresses of the 1950s). It may have been due to the fact that after her contract with Universal ended in the late Fifties, she focused on starting a family and spent more time appearing on television. I personally believe that her kind demeanor might have had something to do with it as well--the entertainment industry is a tough business. (In her autobiography THE LUCKY SOUTHERN STAR--REFLECTIONS FROM THE BLACK LAGOON she literally doesn't have a bad word to say about anyone.)

Like so many other people, I first became aware of Julie Adams through THE CREATURE FROM THE BLACK LAGOON. It was basically another of her "nice girl" roles, but she made a definite impression. Any one who has seen BLACK LAGOON can fully understand why Richard Carlson, Richard Denning, and the Creature fight over her. It's surprising that Universal didn't put her in more horror/science fiction pictures (if there is any movie genre that Julie should be associated with, it's the Western). Despite BLACK LAGOON being somewhat of an exception in her overall career, she became forever known as a Scream Queen.

Many other performers would have rebelled against that label but Julie Adams wound up accepting it with class and style. It was a privilege to have met her, and I sincerely hope she knew how untold numbers of monster kid fans felt about her.