About a week ago, the esteemed Joshua Kennedy (writer, producer, and director of HOUSE OF THE GORGON) asked me to compile a list of my favorite silent movies. I consider this to be a worthy request, and this list will mark my 700th(!) blog post.

If you think being a classic film buff makes you something of a social misfit, that's nothing compared to having an appreciation for silent cinema. When I actually admit to watching silent movies in front of members of the general public, the usual reaction I get is akin to divulging that I've committed some heinous crime. When most folks think of "silent movies" they automatically picture a clownish-looking fellow running around very fast and throwing pies at people. The idea that there's more to silent cinema than that--much, much, more--still doesn't seem to register today...despite the fact that due to the internet and home video it is much easier to have access to silent titles now.

It's sad that so many people think of silent films as being unfashionable, or not as "properly made" as sound movies. Film is a visual medium, and great silent features are about as close to pure cinema as you can get. The term "silent film" is a bit of a misnomer--these movies were always shown with some sort of musical accompaniment. I'm sure many people-even some who consider themselves film buffs--do not watch silent movies for the simple reason that it's not a trendy 21st Century thing to do. I find such thinking ridiculous--if you worry about what other people think instead of following your own passions, you're not going to have much of a life.

I watch silent movies not because I'm trying to prove that I'm sophisticated or smart--I watch them because I truly enjoy them. A great silent film--especially one that has been restored to its proper projection speed, running time, and visual quality--has a timeless beauty and elegance to it. A lot of movie conventions that we assume were developed in the sound era were used by filmmakers 100 years ago. Many of the great silent film sequences still hold up today. To take one example, the siege sequence in the climax of the second part of Fritz Lang's DIE NIBELUNGEN still ranks as one of the greatest battles in movie history--I doubt CGI or even today's sound effects could improve upon it.

I don't want this to be a "eat your vegetables" type of rant--I sincerely believe the best way to gain an appreciation of something is to discover its positive attributes on your own, not because someone told you to like it. I do wish though that more folks who have never seen a silent film would just watch one of the classic examples of the genre and come to their own conclusions. The breadth and variety of silent cinema is astounding--there's much more to the era than just slapstick comedies and tales influenced by German Expressionism.

Now...to the list. Whenever I do one of these "Top Favorites" lists, I always go back to my Top 100 Favorite Films list I wrote a few years ago. That list included eight silent films--I'm sure most people in the world today have never seen, nor ever will see, eight silent movies in their entire lives. So those eight make up the majority of the list. I've added a ninth title, and then I'll give some other personal favorites and recommendations.


1. METROPOLIS Directed by Fritz Lang
I have this movie listed as my fifth favorite film of all time. It's also a film that has a lot of personal meaning for me. I've been fascinated by it since I first saw a very poor version of it on public TV back in the mid-1980s. It's the movie that gave me a proper appreciation for silent film. It also contains what I consider one of the greatest performances of all of cinema history: Brigitte Helm in a dual role as Maria and her artificial twin.

2. THE GENERAL Directed by Buster Keaton
I have this listed as my 8th favorite movie of all time. Buster Keaton was one of the greatest cinematic geniuses ever, and you can find no better proof of his artistry than this. All the gags here flow so smoothly, and they come off so spontaneous and natural, that you feel the story wasn't planned at all--if feels as if it's happening right in front of you. And even though this is a comedy, THE GENERAL is actually one of the most authentic Civil War movies ever made. (I've read articles about the real incident the movie is based on, and Keaton didn't really stray too far from the truth.)

3. THE PHANTOM OF THE OPERA Directed by Rupert Julian
The movie itself has a lot of issues--it had a very complicated production history, and the most widely known version of it today is very different than what was originally shown in theaters when it premiered--but it rates highly due to Lon Chaney's magnificent (and moving) performance.

4. SEVEN CHANCES Directed by Buster Keaton
Yes, another Keaton film, featuring one of the greatest chase sequences of all time. (I'll take Buster over Tom Cruise any day.)

5. NOSFERATU Directed by F.W. Murnau
The creepiest vampire movie ever made, with Max Schreck as the creepiest movie vampire ever.

6. DIE NIBELUNGEN Directed by Fritz Lang
A stupendous, mammoth four-plus hour-long fantasy tale, the silent movie equivalent of THE LORD OF THE RINGS.

8. THE NAVIGATOR Directed by Buster Keaton and Donald Crisp
Yes, two more Keaton classics. Buster is definitely my favorite silent film performer of all time, and any film he made in the silent era is worthy of multiple viewings. 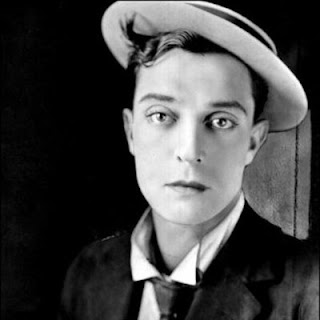 My favorite silent movie performer of them all: Buster Keaton


9. THE CABINET OF DR. CALIGARI Directed by Robert Wiene
An obvious choice, but an important one. There still hasn't been anything quite like it since it was made about 100 years ago.


Usually with a list like this I have at least ten titles. I racked my brain trying to pick a #10, but I couldn't come to a decision. So instead I'll list some personal favorites and recommendations from my home video library. I'm sure a lot of these titles will sound like the Usual Suspects of Silent Film, but I make no claim on being an expert on this genre. There are many, many people out there who know far, far more about silent cinema than I do.

Other favorites and recommendations:

Films with Douglas Fairbanks: THE THIEF OF BAGDAD, THE BLACK PIRATE

Films with Harold Lloyd: Most know about SAFETY LAST! and THE FRESHMAN, and those are excellent....but also check out THE KID BROTHER, GRANDMA'S BOY, and SPEEDY.

Films with Lon Chaney: Just about all of Chaney's collaborations with Tod Browning are interesting, especially THE UNKNOWN and THE UNHOLY THREE. I also recommend THE PENALTY. The Chaney THE HUNCHBACK OF NOTRE DAME is worth watching only for his performance--the scenes in which he doesn't appear are rather dull.

Films directed by Paul Leni: THE CAT AND THE CANARY, THE MAN WHO LAUGHS, WAXWORKS

Various other fantastic silent films: THE GOLEM, THE MAGICIAN, THE LOST WORLD, HAXAN

Films directed by Abel Gance: J'ACCUSE! and of course the superlative NAPOLEON (unfortunately I have not yet seen the newest restored version of this film that has been released on home video overseas).

The cinematic works of George Melies.

What about Charlie Chaplin? I certainly respect the man and his work...but honestly, I think Buster Keaton, and even Harold Lloyd, were more innovative. My favorite Chaplin film is THE GOLD RUSH.

And what about D.W. Griffith? Yes, he's an important figure in the history of the cinema...but I find his films rather hard to get through. (And no, it has nothing to do with political correctness.) I've also learned over and over again through silent film experts in print and on the internet that many of the innovations that Griffith is credited with having invented had already been established by other filmmakers.

Many of the titles I have just mentioned are in public domain, and can be viewed on YouTube....but if you really want to watch these films the way they were meant to be seen, you need to find their official releases on home video. Kino by far is the best company when it comes to silent movie releases. Flicker Alley and Criterion are noteworthy for the genre as well.