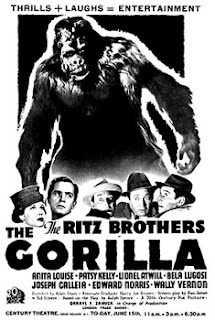 THE GORILLA, produced in 1939, is actually the third film made by 20th Century Fox with that title. All three versions were based on a stage play by Ralph Spence. The first two cinematic adaptations were made in 1927 and 1930, and they are now considered lost.

The 1939 version is notable for the appearances of Bela Lugosi and Lionel Atwill, but their roles are rather small. As you can see in the poster above, the duo are billed below the female leads and the Ritz Brothers, who are (unfortunately) the real stars of the film.

Ralph Spence's original play of THE GORILLA was one of the many "old dark house" mystery thrillers of the 1920s such as THE BAT and THE CAT AND THE CANARY. The play had two bumbling detective characters, and for the 1939 film version Fox added another to facilitate the casting of the Ritz Brothers. (Paramount would do something similar the same year when they cast Bob Hope in a new version of THE CAT AND THE CANARY, but of course Hope would wind up being much more successful than the Ritz Brothers.) The studio added more to the comic element of the story by having Patsy Kelly play a frightened wisecracking maid.

The 1939 version of THE GORILLA begins with a rather effective montage of newspaper clippings and quickly edited shots which chart the crimes of a murderous fiend called (what else) "The Gorilla". (This is actually the most exciting sequence in the picture.) The scene then shifts to the obligatory large, old, dark rambling house, the home of financier Walter Stevens (Lionel Atwill). Stevens, who has been involved in some questionable deals, receives a threat in a note from the murderer that he is to be the Gorilla's next victim. Stevens hires three men from the Acme Detective Agency (the Ritz Brothers) as "protection". He also calls for his niece (Anita Louise) and her fiancee (Edward Norris). The typical creepy old house antics ensue, with secret passageways, a hidden safe, stormy & rainy weather, characters acting suspiciously, and a "real" gorilla (actually a guy in a gorilla costume).

Bela Lugosi plays Walter Stevens' butler Peters, and he doesn't get much to do, other than give the rest of the cast the willies whenever he enters a room. Lugosi really doesn't do anything menacing--he spends most of the movie with a benign smile on his face--but because he's Bela, the audience is supposed to suspect he is up to something. Lugosi would spend the next decade playing way too many suspicious servants in movies, to the consternation of his present-day fans. The role enacted in this movie by Joseph Calleia--that of a mysterious stranger who sneaks his way into Stevens' house and winds up having a major impact on the plot--is the part Bela should have played.

Lionel Atwill doesn't get to do much either, mainly because his character winds up missing for most of the film. But because he's Lionel, one assumes that Walter Stevens has some secrets of his own, especially when it is revealed that Stevens and his niece are co-heirs to a family fortune, and if one of them happens to die, the other gets all the money. Anita Louise and Edward Norris thankfully don't take up too much screen time as the bland young romantic couple--their characters have an almost negligible effect on the plot.

As stated before, this is really a Ritz Brothers picture, and your enjoyment of it will depend on how you feel about them. The best way I can describe the Ritz Brothers is that they were a weaker version of the Three Stooges. The main difference is that while the Stooges each had distinct looks and personalities, the Ritz Brothers look and sound almost exactly alike. They act as dopey and silly as possible, but they don't come off as very funny. There's a reason the Ritz Brothers are nowhere near as famous as most of the other movie comic teams of the same period--they're just not very amusing. They spend a lot of time here yelling and screaming, as does Patsy Kelly, who was basically known for her loud behavior. The cumulative voice gyrations tend to get on one's nerves.

THE GORILLA does have some very brief atmospheric scenes, such as the one where the "real" gorilla carries off Anita Louise and climbs to the roof of the house with her (the scene however doesn't last long enough to take advantage of the situation). Director Allan Dwan uses a fair amount of expressionistic close-ups, particularly of the gorilla costume (which was not worn by Charles Gemora--it was worn by a man named Art Miles). Because this was made at a major studio like 20th Century Fox, the sets representing the Stevens home are very impressive, and they are photographed extremely well in black & white by cinematographer Edward Cronjager.

THE GORILLA only runs about 66 minutes, and this means at least the story does not drag. It's not a terrible film, but it's another example of a production that does not make the most effective use of performers such as Lugosi and Atwill. The double-twist ending (which I won't reveal here) might though pleasantly surprise classic horror film star fans.