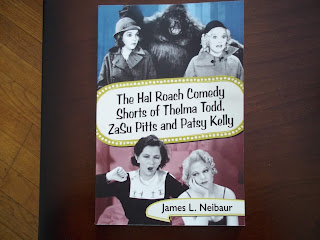 Neibaur provides brief biographies of the lives of Todd, Pitts, and Kelly before the series, and he provides a solid background for what was going on at the Hal Roach Studios at the time these shorts were being made. Each comedy short receives a cast & crew list, and each is reviewed and analyzed. Most of the shorts get at least one illustration to accompany it.

Neibaur covers the transition between Zasu Pitts and Patsy Kelly, and how the tragic death of Todd affected the series. The author also looks at the films Kelly made for Hal Roach with Pert Kelton and Lyda Roberti, and briefly discusses the later years of Kelly and Zasu Pitts.

This is certainly a welcome volume, since no other books or articles cover the Todd-Pitts-Kelly series of shorts in such detail. What coverage the series does get is usually focused around Thelma Todd's personal life. Neibaur thankfully avoids any gossipy speculation on Todd's demise, and instead focuses on her performances in the shorts. Neibaur has a easy-to-read, straightforward writing style that sticks to the facts and avoids hyperbole. (He also avoids spending page after page doing nothing but describing the plots of the films covered, something way too many other McFarland movie book authors indulge in.)

Due mainly to Neibaur's get-to-the-point style, this is a small, slim book--it is in paperback and it is only 178 pages long. Because it is published by McFarland, it is a bit expensive for its size (that's certainly not the fault of the author). If I have a complaint about this book, it is that I wanted more to it--more analysis of the series, more illustrations, more info on the ladies involved. A few McFarland books have been re-released later on in expanded editions--I'd love to see that happen with this one.

James L. Neibaur deserves a major amount of credit for writing a book on this particular subject, instead of adding to the unending list of volumes on more famous comedy teams like Laurel & Hardy or the Marx Brothers. Now that the Todd-Pitts-Kelly shorts are all officially on home video, many people will be seeing them for the first time, and any info on them is greatly appreciated. Hopefully this book will spark more interest in Thelma Todd's actual film career instead of conspiracy theories about her private life.