My great friend, independent filmmaker Joshua Kennedy, recently asked me if I had ever seen a 1967 film called COUNTERPOINT. The movie stars Charlton Heston, a screen icon that has had a major influence upon Josh. I had never actually heard of the film, let alone seen it. I did happen to come across COUNTERPOINT on YouTube and I viewed it due to Josh's recommendation.

COUNTERPOINT is set during the Battle of the Bulge in World War II. I'm a huge WWII buff when it comes to real history and films, but COUNTERPOINT had so far eluded me. Seeing the film for the first time, it's not surprising that it is not very well known. It's very different from the many big-budget action packed WWII epics that were produced during the 1960s.

Charlton Heston plays Lionel Evans, a famed conductor who is leading his symphony orchestra on a USO tour at the European front during WWII in 1944. Evans and his musicians are playing for a group of U.S. Army brass in Belgium when the Battle of the Bulge breaks out. Evans' orchestra tries to get away from the area of conflict, but their bus is stopped by German troops. The musicians are taken to a nearby castle, which has become the temporary headquarters of a panzer division brought to a halt by a lack of fuel and led by a General Schiller (Maximilian Schell). Schiller has orders to shoot any prisoners--the German offensive can't afford the time or supplies to care for POWs--but the General knows who Evans is, having seen him perform before the war broke out. Schiller decides to not massacre the orchestra, at least until they perform a concert for him personally. The imperious Evans, a man used to getting his own way, refuses....and a battle of wits and wills begins between the conductor and the General, with the lives of 70 men and women hanging in the balance.

COUNTERPOINT doesn't have the high-powered highlights of such 1960s WWII titles such as THE LONGEST DAY and THE GREAT ESCAPE. The only action scene is a shoot-out during the climax--I wouldn't even classify it as a full battle. Heston's Lionel Evans does grab a gun at the end of the story, but he barely knows how to use it. The major conflict in the story involves Evans and General Schiller, two men with massive egos who are determined not to back down to the other.

Charlton Heston's larger-than-life persona enables him to fit the role of Lionel Evans very well. It is established in the story that Evans is a world-renowned conductor, and the man certainly acts as if he's well aware of this. When the German attack breaks out at the beginning of the film, Evans seems more concerned over his concert being interrupted than anything else. After being captured by the Germans, Evans (while dressed in white tie, tails, and a red-lined black cloak) barks out orders at the bemused soldiers holding him and his troupe. It's easy to ascertain that playing in Evans' orchestra would not be an enjoyable task. At first Evans flat out refuses to play a concert for Schiller, but one senses that it is due to the conductor's pride, not because of any sort of patriotism or hatred of the Nazi regime. After several of his orchestra members plead with Evans about the danger they are all in, the man seems to relent--but he is only biding time by having the orchestra "practice". In most of Heston's film performances, his characters have a huge amount of stubbornness in them--and this definitely comes out in Evans. At the time this film was made, Heston was one of the biggest movie stars in the world--so playing this role was a bit of a departure. Heston's Evans is at times rude, obnoxious, domineering, and brutally honest.

Heston is well-matched in the acting department by Maximilian Schell as General Schiller. Schell gives the General a deceptively charming manner (he's constantly smiling), but at the same time there's an ambiguity to the man. The viewer never knows how brutal Schiller might wind up being. COUNTERPOINT does fit the typical WWII movie template in one way--the lead German officer character has an even more fanatical counterpart. Here it's the ruthless Col. Arndt, who just wants to eliminate the entire orchestra as soon as possible. Arndt is played by WWII (and horror) movie veteran Anton Diffring. 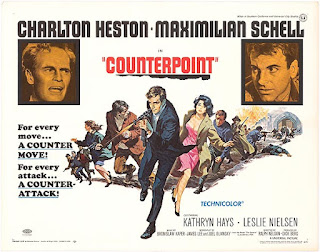 A rather deceptive poster for COUNTERPOINT


The only other members of the orchestra we really get to know are played by Leslie Nielsen as Evans' concert master, and Kathryn Hays, a cellist who was a former flame of Evans, but who is now married to Nielsen's character. Nielsen gets stuck in a very thankless role--he spends most of his time silently watching both Evans and Schiller show interest in his wife (Hays has more scenes with Heston than she does with Nielsen).

COUNTERPOINT was directed by Ralph Nelson, and he does a very efficient job, considering that the movie didn't seem to have a very large budget. (We are constantly told that the orchestra is made up of 70 musicians, but there appears to be only about half that number.) The entire production appears to have been filmed at Universal Studios, and I believe that the legendary "Phantom of the Opera" stage set was used during the interrupted concert at the beginning of the story. Nelson gets a lot of suspense out of a subplot involving two American G.Is who are hiding among the orchestra members--a scene in which one of the soldiers is forced to provide proof of his supposed musical talents winds up being the best scene in the movie. What really keeps the viewer's interest is whether the orchestra will avoid being executed by the Germans, since the characters of Evans and Schiller seem more interested in getting the other to back down rather than the lives of a large group of innocent civilians.

COUNTERPOINT is a bit disarming as a WWII film--there's no slam-bang heroics, and Charlton Heston's character isn't very likable. As you can see in the picture of the movie's poster above, it was sold as a action-adventure extravaganza, despite the fact that it clearly isn't. It is a very well done off-beat war film which is about personalities rather than battles, and Charlton Heston and Maximilian Schell are well worth watching in it.