KNIVES OF THE AVENGER On Blu-ray From Kino 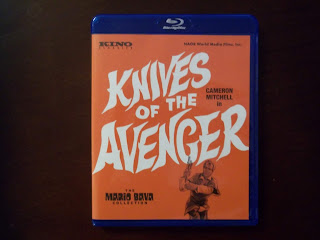 As Bava expert Tim Lucas explains in his audio commentary, KNIVES OF THE AVENGER was originally a production directed by Leopoldo Savona. The filming was shut down after a couple weeks after financing ran out. Some time later the producers hired Mario Bava to finish the picture. Most of the final product was directed by Bava, and while it isn't one of his best features, he was still able to bring enough of his low-budget cinematic artistry to make it an interesting story. (Bava is credited on the film as "John Hold", a variation on his "John M. Old" pseudonym.)

Cameron Mitchell (who had already worked with Bava a number of times by this point) plays a Nordic warrior who calls himself Helmut. The mysterious Helmut wanders into the life of a beautiful woman named Karin and her young son Moki. Karin is married to Arald, king of a Viking tribe--but Arald has been missing for the last few years, and a vicious rival named Aghen is determined to claim Karin as his own and gain power. Karin and Moki are in hiding, and Helmut goes out of his way to help them. Helmut's actions are not just out of decency--the man has issues with Aghen as well, and he also has a deeper connection with Karin and Moki than just friendship.

Bava fans would probably compare KNIVES OF THE AVENGER with the director's earlier ERIK THE CONQUEROR, another Viking tale also starring Cameron Mitchell. The two movies are very different, however. When Bava took over direction of KNIVES OF THE AVENGER, he didn't have much time or money to complete it, so the resulting movie makes ERIK THE CONQUEROR look like a grand spectacle. KNIVES OF THE AVENGER is much more low-key and personal, focusing on a few characters. The film is very much like an Italian Viking version of SHANE, with Cameron Mitchell's weary Helmut coming to the aid of a mother and her son. There's also a number of Spaghetti Western elements in the story as well. Mitchell's Helmut definitely has a lone stranger/gunslinger-like vibe to him, except that he throws knives instead of shooting bullets. Helmut's proficiency in knife-throwing is almost superhuman (I can't help but wonder if the man was an ancestor to Tomas Milian's Cuchillo), and he seems to carry an inexhaustible supply of blades on his person at all times.

Despite Helmut's talents, there's not a lot of action scenes in KNIVES OF THE AVENGER. It is the relationships between the main characters that are most important here--especially the revelation that ties Helmut, Karin, Moki, and main villain Aghen together, which I will not reveal for those who have yet to see this film. The one major action sequence is a showdown between Helmut and Aghen in a dark, empty tavern--a sequence which I think ranks among Bava's overall best.

KNIVES OF THE AVENGER was part of the first Mario Bava DVD box set released by Anchor Bay about 10 years ago. This Blu-ray version features a magnificent transfer--it's one of the best looking out of all of the Kino Bava Blu-rays. The disc has an Italian soundtrack with English subtitles, and a English dub which is serviceable but unfortunately does not use Cameron Mitchell's voice. An English main title sequence is included, as well as several trailers for other Mario Bava-directed films.

The most important extra is the audio commentary by Tim Lucas. As to be expected by now, it's an excellent one. Lucas discerns what parts of the film Bava did not direct, while linking the production to the rest of the director's catalog. He discusses the relationship between Cameron Mitchell and Mario Bava, and he gives out all sorts of relevant information (amazingly, even Lucas does not know the name of the woman who impressively played the witch-like figure at the beginning of the film).

KNIVES OF THE AVENGER doesn't have the wild action-packed flair of most 1960s sword-and-sandal offshoots, but any Mario Bava film (even one he didn't totally direct) is worth seeing--especially when it looks as fantastic as it does on this Kino Blu-ray.