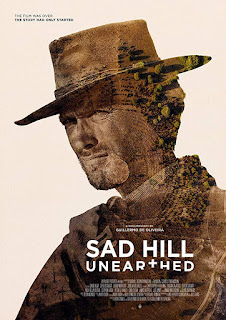 SAD HILL UNEARTHED, a magnificent new documentary written & directed by Guillermo de Oliveria, examines how a small group of enthusiastic and determined fans of the movie THE GOOD, THE BAD, AND THE UGLY set out to restore one of the film's most iconic locations.

The majestic climax of Sergio Leone's THE GOOD, THE BAD, AND THE UGLY takes place at a Civil War-era cemetery, which was built for the film near Santo Domingo de Silos, Burgos, Spain. It was at this location that two of the greatest sequences in cinema history were staged: the "Ecstasy of Gold" run through the grave markers by Eli Wallach and the final three-way standoff between Clint Eastwood, Wallach, and Lee Van Cleef.

After the making of the film, the cemetery, which was built in a remote location, became unkempt and overgrown. In recent years a group of fans has formed the Sad Hill Cultural Association, and they have undertaken the arduous task of restoring the site to how it looked during the making of GBU in 1966.

SAD HILL UNEARTHED charts the restoration progress while giving historical background and detail on the production of THE GOOD, THE BAD, AND THE UGLY. Among those interviewed who actually worked on the film are Clint Eastwood, Ennio Morricone, and editor Eugenio Alabiso. There's footage of a 1966 interview with Sergio Leone himself (believe it or not, he's eating spaghetti while doing it), and some of the men who worked as extras on GBU while serving in the Spanish Army at the time give their memories as well.

A few notable fans of the film also discuss what it means to them personally, such as director Joe Dante, Metallica member James Hetfield, and Leone biographer Sir Christopher Frayling. Many of the people involved in the restoration give their thoughts, and they are shown as dedicated and hardworking men and women who have been truly inspired by the project.

There's a lot of positive energy emanating from this documentary. SAD HILL UNEARTHED shows how a legendary movie, even one as violent as THE GOOD, THE BAD, AND THE UGLY, can bring people from all sorts of backgrounds together to participate in a creative and affirming endeavor. One of the men involved in the restoration of Sad Hill Cemetery refers to it as a sort of archeology, and he's absolutely right. It might seem silly to the uninitiated to put in so much time and work on a long-ago movie location, but THE GOOD, THE BAD, AND THE UGLY is a pop-culture milestone, and the Sad Hill Cemetery is probably more recognizable to people around the world than any real Civil War site.

The documentary climaxes with a 50th anniversary showing of THE GOOD, THE BAD, AND THE UGLY on the restored Sad Hill site. The sense of joy and exhilaration from the audience during this sequence brings to mind something Joe Dante said earlier in this film about how for many people, going to the movies is like going to church. It can be stated that 21st Century society has too much invested in pop culture, and there's plenty of negativity to be found on any movie discussion site on the internet....but SAD HILL UNEARTHED presents the constructive aspects of movie fandom, and defines how important certain movies can be to us.

THE GOOD, THE BAD, AND THE UGLY is my second favorite movie of all time, so obviously I'm inclined to love SAD HILL UNEARTHED. But this is still a worthy documentary even if you are not as big a fan of GBU as I am. It shows how the cinema can inspire and influence people in a positive manner.
Posted by Dan Day, Jr. at 8:34 AM