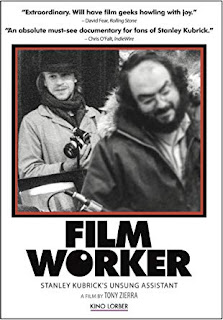 FILMWORKER is an outstanding documentary on the life of Leon Vitali, and his long-time association with the brilliant film director Stanley Kubrick.

Leon Vitali is best known for playing the pouty stepson of Ryan O'Neal in Kubrick's BARRY LYNDON. At the time Vitali already had an accomplished career as an actor in England, appearing on stage, TV, and films--but nothing in his professional career prepared him for Kubrick's meticulous and demanding work ethic. Vitali was so impressed by his experience on BARRY LYNDON that he wanted to know more about Kubrick's film making methods. What resulted was Vitali stepping away from his acting career to become Kubrick's general factotum. Over the years Vitali did a little of everything, including being a Foley artist, on-set photographer, casting associate...eventually he became the main protector of the Kubrick film legacy.

Stanley Kubrick was of course one of the greatest film directors of all time, and he was also one of the most mysterious and reclusive. FILMWORKER lifts the veil a bit on Kubrick's elusive personality, but in the end the viewer will probably still not know the man all that well. Leon Vitali also winds up being a bit mysterious as well. A talented man in his own right, Vitali sublimated his personal and professional life to Kubrick's whims. He worked long hours, day after day, to satisfy one of the most exacting artists ever--an artist who, it seems, wasn't all that fulsome in his gratitude for what Vitali was doing for him.

Vitali obviously was excited to work side-by-side with such a creative genius--but was it all worth it? I've read a lot about Kubrick, and watched a number of programs about him, and Vitali is barely mentioned--I certainly never knew how much he was involved with Kubrick's latter films. Vitali doesn't seem to have been properly compensated for all his labors either. The mental and physical toll that Vitali went through on behalf of Kubrick is more than evident when watches this documentary.

The film does not just present Vitali's personal recollections of his relationship with Kubrick--many other associates of the director give their thoughts, and actors Danny Lloyd and Lee Ermey attest to how much Vitali helped in their performances for THE SHINING and FULL METAL JACKET.

At the beginning of this documentary, Leon Vitali is compared to a moth that is attracted to a bright light, only to wind up burning itself. There's some validity to that. While Vitali himself seems satisfied with how his life turned out, one cannot help wonder if the price to work alongside such an artist as Kubrick was too high. FILMWORKER is an intriguing examination of what it is like to personally deal with uncompromising genius on a day-to-day basis, and the effect such an experience has on a person.