Book Review: "ONE MAN CRAZY!" THE LIFE AND DEATH OF COLIN CLIVE 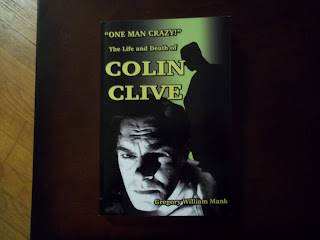 No writer is able to vividly bring to life the various personalities involved in the making of classic Hollywood horror films like Greg Mank--and he does it again in his latest book, "ONE MAN CRAZY!" THE LIFE AND DEATH OF COLIN CLIVE.

Mank has written extensively on Clive in his earlier works, including a mini-bio on the actor that was featured in the book HOLLYWOOD'S MADDEST DOCTORS. But those were just appetizers to "ONE MAN CRAZY!", a full-length biography running nearly 400 pages.

Colin Clive is best known now for his portrayal of Henry Frankenstein in the James Whale-directed movies FRANKENSTEIN and THE BRIDE OF FRANKENSTEIN. But it was his playing of the role of Captain Stanhope in the original stage and film productions of the WWI drama JOURNEY'S END that brought Clive notoriety. Due to Stanhope, Clive was fated for the rest of his short life to play characters who were undergoing major physical or psychological crises. Through his unique and highly dramatic writing style, Mank relates how in real life Clive faced several traumas of his own.

Mank presents Clive as a highly strung individual on stage and screen and off. At times in his films, Clive could unleash a near manic intensity--frequently on screen the actor looks as if the entire weight of the world is on his shoulders. Ironically Clive had not grown up wanting to be an actor--Mank delves into the man's family history to show that he really wanted to have a military career in the British Army. Clive actually attended the legendary Royal Military Academy at Sandhurst, but a riding accident put an end to his dreams of martial glory.

Clive then decided to try acting, and although he eventually became successful at it, the man suffered from stage fright, insecurity, and self-doubt. Clive turned to alcohol to cope, and Mank, in his own inimitable way, charts the actor's highs and lows. Mank doesn't wallow in Clive's troubles, but he doesn't sugarcoat them either.

Mank, as he always does, builds his tale upon a wealth of exhaustive research, personal interviews, and rare photos. One would assume that by now, the mine of information on the classic Universal horror films has been long played out--but the writer is still digging up insightful nuggets. Among the many revelations that movie buffs will be intrigued by in this volume is the fact that one of Clive's many fervent fans during the 1930s happened to be none other than Ayn Rand!

I've been a huge admirer of Greg Mank's work since I borrowed a copy of his IT'S ALIVE from a South Bend Public Library in the mid-1980s, so it's no surprise that I without hesitation recommend this book. Colin Clive had an all too brief acting career, but he still was able to leave a huge mark on popular culture. Greg Mank's biography goes beyond mere old movie gossip--it's a poignant tribute to a fine performer who didn't deserve the sad fate that life had in store for him. Usually Mank's books are published by McFarland, but this one comes from Midnight Marquee Press--which thankfully means it's a bit more affordable.
Posted by Dan Day, Jr. at 1:59 PM