THE PLAGUE OF THE ZOMBIES On Blu-ray From Shout Factory 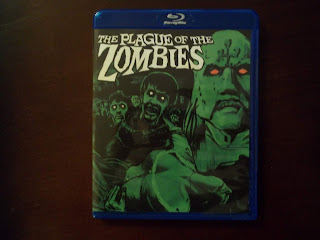 Shout Factory's latest Region A Hammer Blu-ray release is the very effective 1966 THE PLAGUE OF THE ZOMBIES.

Sometime in the late 19th Century, Sir James Forbes (Andre Morell) travels to Cornwall with his young daughter Sylvia (Diane Clare) to visit his former student Dr. Peter Thompson (Brook Williams). Peter is desperately trying to fight a mysterious and deadly disease that has beset his small village. Sir James and Peter discover the cause is black magic, as the local squire, Clive Hamilton (John Carson) is turning the locals into zombies so he can force them to work in his family's tin mine.

THE PLAGUE OF THE ZOMBIES is officially set in Cornwall, but it really takes place in that beloved locale known as "Hammerland". All the familiar sights from that locale are here--the Bray Studios back lot, Oakley Court manor, and Black Park forest. The typical denizens from Hammerland are here as well--suspicious villagers, arrogant aristocrats, puzzled constables, an ineffectual priest, and young lovelies such as Diane Clare and Jacqueline Pearce, who steals the film as Peter's tragic wife Alice.

In 2019 it's hard to call any Hammer film underrated--any new release of any kind involving the company's product automatically becomes a trending topic--but THE PLAGUE OF THE ZOMBIES doesn't get as much attention as the other Hammer classics starring either Peter Cushing or Christopher Lee and directed by Terence Fisher. PLAGUE is very well done all the way around, with excellent leading performances by Andre Morell and John Carson. It would be easy to consider Cushing and Lee in their roles, but Morell and Carson bring some welcome variety to the good/bad savant dynamic. Morell gives the story a solid foundation as the no-nonsense Sir James, and the velvet-voiced Carson makes an effective and intriguing menace.

Director John Gilling brings a lot of vitality to the story, and James Bernard contributes one of his best (and somewhat off-beat) music scores. The zombie makeups by Roy Ashton are atmospherically gruesome, and they still hold up even when compared to the over-the-top gory undead creatures of today's movies and TV. The PLAGUE zombies take center stage in a nightmare sequence that is one of the best set pieces in Hammer history.

THE PLAGUE OF THE ZOMBIES was one of the titles included in the famed Anchor Bay Hammer home video releases in the 1990s. The movie has always had a dark, murky look to it (the fact that there are several day-for-night scenes didn't help). The 1.66:1 transfer on this Blu-ray from Shout Factory is far superior than the Anchor Bay release--it's the best I've ever seen this movie look, with vivid color and sharpness. The improved visual quality really helps with the underground cave scenes, and it gives one a new appreciation for Arthur Grant's cinematography.

Shout Factory as usual presents a number of extras, including a "World of Hammer" episode, and a 2012 featurette on the making of THE PLAGUE OF THE ZOMBIES that features John Carson and Jacqueline Pearce (sadly both of them have passed away since). There's a restoration comparison, a trailer, and an image gallery, and the disc cover is double-sided.

Two brand new commentaries are on this disc. Troy Howarth goes solo on his enjoyable talk, and he gives out all the info one needs on the film and those who were involved in making it. He's still able to fit in his own personal analysis and insights on the movie. The second commentary has Constantine Nasr, Steve Haberman, and Ted Newsom, and it's a somewhat rambling but fun discussion, mainly due to the fact that it's like being in a room with three Hammer geeks.

American film geeks who don't have multi-region players have always wanted the type of Hammer home video releases that are available overseas, and it seems that Shout Factory is ready to deliver them. The company has more Hammer product ready for the future, and in my opinion this Blu-ray of THE PLAGUE OF THE ZOMBIES is now the best version of this movie on the market.