SCREAM AND SCREAM AGAIN On Blu-ray From Kino 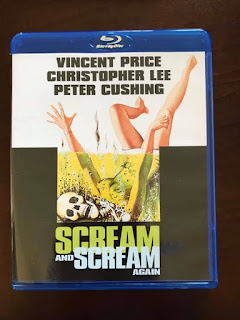 SCREAM AND SCREAM AGAIN is famous--or infamous--for featuring three of the greatest stars in fantastic films history. Vincent Price, Christopher Lee, and Peter Cushing all get major billing, despite the fact that they all play supporting roles (Cushing is in only one scene). The 1969 film has been released on Blu-ray again, this time by Kino.

I have to admit that for a long time I wasn't all that fond of SCREAM AND SCREAM AGAIN. Like many others, I was too focused on the fact that the mighty trio of Price, Lee, and Cushing didn't have enough screen time. (The three never actually appear onscreen together, and only Price and Lee get to interact--but that's at the very end of the film, and then only very briefly.) One has to look beyond the misleading casting to fully appreciate the film's merits. SCREAM AND SCREAM AGAIN is one of the most unique movies made during the late 1960s, presenting a story so off-the-wall that it's hard to compare it to anything else. Because of the appearances of Price, Lee, and Cushing, one expects it to be a classic English Gothic. It does have a few elements of that genre, but the movie also has ingredients of horror, science fiction, film noir, urban crime thriller, and Cold War political conspiracy. It's hard to pin down a story that includes, among other things, a serial killer that sucks blood from his victims, vats of acid, and synthetic humans.

Christopher Wicking's screenplay for the movie is equal parts intriguing, unorthodox, and frustrating. Wicking juggles a number of subplots which switch back and forth rapidly. Just when the viewer thinks things are getting a bit clearer, the story goes off on another tangent--or a supposed major character is bumped off, making things more mysterious. The unimaginative will probably throw up their hands and give up trying to watch a movie like this, but the more creatively inclined may be fascinated by the strange plot structure (even if, at the end, it still doesn't make a lot of sense).

The disarming attitude taken by the script also extends to the casting as well. There isn't really a main character in the film. As stated before, Price, Lee, and Cushing have small roles, and so does most of the rest of the rather large cast. Genre notables such as Yutte Stensgaard (LUST FOR A VAMPIRE), Judy Huxtable (THE PSYCHOPATH), and Peter Sallis (TASTE THE BLOOD OF DRACULA) have virtual cameos. The real stars of the film are Alfred Marks as a no-nonsense, sarcastic police superintendent who's trying to investigate all the bizarre goings-on, and Marshall Jones as a vicious agent from an unnamed European totalitarian state who has the ability to dispatch people with a killer Vulcan neck pinch.

Director Gordon Hessler and cinematographer John Coquillon constantly keep the pot boiling with various off-kilter shot set-ups and plenty of hand-held camerawork. At times the movie takes on a semi-documentary style, bringing a raw reality into the crazy events being shown. At about the middle of the story one of the longest chases in movie history is staged. It's a highly charged and very effective sequence, but it also defines how out-of-the-box SCREAM AND SCREAM AGAIN is (one doesn't expect a modern car chase in a movie featuring three classic horror stars). The movie was a co-production between Amicus and American-International, but it was AIP that had the most input in the final result. SCREAM AND SCREAM AGAIN is far more violent and explicit that the typical Amicus fare of the period.

SCREAM AND SCREAM AGAIN has been released on home video numerous times. Kino's new Blu-ray of the title features two different cuts of the movie--a U.S. version and a U.K. version. The contents of the two are almost exactly the same, except for a few subtle differences. The U.K. version does have a couple of striking lines of dialogue between Vincent Price and Christopher Lee.

The real difference between the two cuts is in the visual quality. The U.S. version presented on this disc is an excellent print, very clear and colorful. The U.K. version is not in good shape--the colors are faded, and at times the picture is so murky that it's hard to see what is going on. Watching the U.K. version on this disc made me feel like I was viewing an old print on a late night TV broadcast.

The main extra is another insightful and fact-filled commentary from Tim Lucas. He's a big fan of the film, and as usual he makes a number of analytical points I would never have thought of.

If you've never seen SCREAM AND SCREAM AGAIN, don't try to assume what type of movie it's going to be by the names of Price, Lee, and Cushing in the credits. It's not a Saturday matinee monster flick--it's a very modern disorienting and disconcerting suspenseful thriller that crosses over several genres. It's a movie that demands multiple viewings, simply because it's hard to figure things out on the first try. It's also a story that demands a suspension of disbelief.