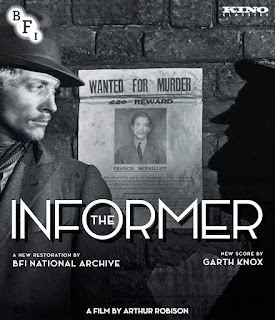 John Ford is my favorite film director of all time, and one of his greatest films is THE INFORMER, the 1935 multi-Oscar winning story of betrayal set in 1920s Ireland. What most people don't realize is that THE INFORMER was a remake--the story had been filmed in England in 1929. That version has just been released on Blu-ray by Kino--actually, I should say both versions, since the '29 THE INFORMER was released as a silent and as a part-sound film.

The 1929 THE INFORMER could easily be mistaken for a German production instead of an English one. Director Arthur Robison had worked extensively in Europe, as had leading actors Lars Hanson and Lya De Putti. The cinematographers, Werner Brandes and Theodor Sparkuhl, were German-born. The movie has the look and feel of a production made at UFA studios instead of Elstree.

Lars Hanson plays Gypo Nolan, a member of the "party" (the actual name of the IRA is never mentioned in the film) in 1922 Ireland. Gypo's best friend Francis is in hiding after killing a police chief. Gypo has developed a relationship with Francis' girl, the beautiful Katie (Lya De Putti). Francis returns from hiding to say goodbye to his loved ones before he goes off to America. Francis secretly visits Katie, which inflames Gypo with jealousy. Gypo turns in his friend to the police, for the sum of 20 pounds. Gypo's rash act has disastrous consequences--Francis is killed in a gunfight, and his fellow party members find out who the informer really is, and they want revenge.

Victor McLaglen had won a Best Actor Oscar for playing Gypo Nolan in the 1935 THE INFORMER. McLaglen's Gypo was somewhat of a lumbering lout. Hanson's Gypo is more subtle, probably because Hanson was more of a leading man type (he had already co-starred with the likes of Greta Garbo). Hanson's Gypo is motivated to inform by his desire for Katie--the love triangle is a major plot point in this version of the film. (There is no love triangle in the 1935 version.) The overriding sense of Catholic guilt that saturates the 1935 version isn't really on display in the '29 production, at least until the climax.

Lya De Putti became famous in the silent era for playing seductive vamps, but she's very subtle here as well. Katie has feelings for both Gypo and Francis, but instead of personally taking advantage of the situation, she seems overwhelmed by it. Director Robison uses many close-ups of the main cast to show their thoughts and feelings at a given time. Despite all the inner turmoil the movie has plenty of visual flair, with the oppressive, shadowy city streets and a few nighttime location sequences. There's also some imaginatively shot gunfight battles, and a scene involving a man hanging from a gutter high on the top of a building which can't help but remind you of the beginning of VERTIGO. (Alfred Hitchcock was of course still working in England at this time, and I've no doubt he was aware of this film.)

The part-sound version also has audio effects added, such as gunshots, breaking glass, etc. There are a few dialogue sequences. For the most part they are handled well--but it's obvious that other performers are saying Hanson's and De Putti's lines (Hanson was Swedish, and De Putti was Hungarian). Research on the internet suggests that the actors mouthed their lines while someone else on the set spoke (Hitchcock did the same thing with Anny Ondra for the sound version of BLACKMAIL.) I didn't think the effect was too disconcerting--others may disagree. The real problem with the dialogue sequences is that no one tries to use an Irish accent! Kino claims that the print of THE INFORMER used on this disc is from a recent restoration by the British Film Institute, and both the silent and part-sound version have exceptional visual quality.

I still prefer the John Ford version of THE INFORMER, but the 1929 version--or versions--are quite interesting themselves. I found the part-sound version to be particularly fascinating.
Posted by Dan Day, Jr. at 7:45 AM