ARABIAN ADVENTURE On Blu-ray From Kino

I had seen every single one of the films Peter Cushing & Christopher Lee appeared in--except for one: ARABIAN ADVENTURE, a 1979 fantasy adventure set in the long-ago Middle East. Kino Lorber has just released the film on home video, and of course I bought it on Blu-ray.

While it's technically accurate to call ARABIAN ADVENTURE a Cushing-Lee movie, the fact is the two have no scenes together in it. Lee stars as the villainous Caliph Alquazar, and Cushing only has two scenes as Wazir al Wuzara. The two actors were available on the set at the same time, and took publicity photos together (see below), so why the filmmakers couldn't figure out a way to get them onscreen at the same time, even if for only a moment, is a head-scratching mystery.

ARABIAN ADVENTURE was directed by Kevin Connor and produced by John Dark. The duo had been behind such Amicus family adventures as THE LAND THAT TIME FORGOT and AT THE EARTH'S CORE, and ARABIAN ADVENTURE is very much in the same vein. It's pleasant, lighthearted entertainment--the movie is rated G, and there's no gore or extreme violence. The movie feels like something made in the 1940s or 50s instead of 1979.

In the far-away city of Jadur, the Caliph Alquazar rules with an iron fist--but he desires even more power. He wishes to obtain the sacred Rose of Mercy, but only a person who is pure at heart can retrieve it. Alquazar promises the kindly Prince Hassan (Oliver Tobias) the hand of his beautiful stepdaughter Princess Zuleira (Emma Samms) if he brings the Rose to him. Alquazar intends to kill Hassan after he has obtained the treasure, but a clever orphan boy named Majeed (Puneet Sira) intervenes. Together with the citizens of Jadur, Hassan and Majeed defeat the evil wizard and restore freedom to the area.

The storyline of ARABIAN ADVENTURE isn't complicated--it's a very generic and old fashioned fairy tale. But it is presented in a very earnest way, and the movie is very colorful and imaginative. ARABIAN ADVENTURE is filled with all sorts of practical effects that were used very heavily in the 1970s--front and back projection, miniatures, matte paintings, etc. Some viewers now might find these effects quaint, but I for one appreciate seeing a fantasy film that doesn't look like a video game. Yes, some of the effects hold up better than others, but if one is willing to get into the spirit of the enterprise, you won't be distracted by them.

There's no doubt that a fair amount of effort and ingenuity went into this production--it doesn't appear cheap. The production design and art direction come off very well, and the costumes (prepared by Hammer veteran Rosemary Burrows) are quite striking. The climax features a dogfight between squadrons of flying carpets, and it actually works better than one would assume. 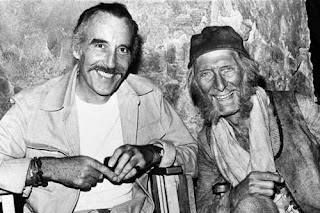 Christopher Lee and Peter Cushing on the set of ARABIAN ADVENTURE

The character of Alquazar is one that Christopher Lee could play in his sleep. but he doesn't--he brings his usual commanding intensity to the role. It may have been just another bad guy role for him, but it gave Lee a far better showcase than most of the other theatrical films he appeared in around this time. Oliver Tobias is okay as the lead hero, but the role really needed someone with a more dynamic personality. Emma Samms fills out the part of the beautiful Princess very well, while young Puneet Sira is quite impressive in a very Sabu-like role. The movie also features Shane Rimmer, the ubiquitous Milton Reid, and John Ratzenberger!

As mentioned before, Peter Cushing's role is virtually a cameo, and French actress Capucine is barely seen as a genie inside a small jewel. Out of all the guest stars Mickey Rooney gets the most to do. He's the strange fellow who operates the three giant mechanical monsters that guard the way to the Rose of Mercy. The monsters are effectively realized, and Rooney hams it up outrageously (although in a movie like this I guess you can't blame him).

Kino's Blu-ray of ARABIAN ADVENTURE looks magnificent, with bright colors and sharp detail. The sound is vibrant, and it shows off Ken Thorne's atmospheric music score.

The main extra on the disc is a new audio commentary with director Kevin Connor, moderated by C. Courtney Joyner. Connor is proud of the movie (as he well should be), and he still remembers plenty of inside info about it. Joyner also asks Connor about various aspects of his overall film making career.

Most of what I had read about ARABIAN ADVENTURE was not very complimentary. Having finally seen the picture, I must said it was better than I expected. It's not a great or groundbreaking film by any means, and the fact that it came out after STAR WARS certainly didn't help it. But it's a well-done story for the young at heart. How one approaches ARABIAN ADVENTURE will determine how one winds up feeling about it--it's not a movie designed for the snarky or the cynical. It's also a film that may now be considered by some to be politically incorrect, since there's not one single member of the main cast that is a native of the Middle East. I found it to be a fun, lighthearted adventure.
Posted by Dan Day, Jr. at 10:14 AM