The Universal Horror Collection: Vol. 1 On Blu-ray From Shout Factory 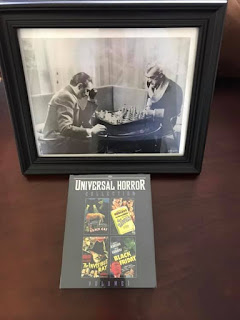 In the past year Shout Factory has released a number of Blu-rays covering various eras of classic fantastic cinema--Universal science-fiction movies from the 1950s, Hammer Films titles from the 1960s, and some of the Val Lewton-RKO series from the 1940s. Now the company delves into the 1930s with the release of "The Universal Horror Collection, Vol. 1". All four films in the set feature Boris Karloff and Bela Lugosi.

For years I've been complaining that Universal hasn't done a lot with much of the classic horror titles in their catalog. Yes, they've constantly been re-releasing the main ones such as FRANKENSTEIN and DRACULA, and they have restored and remastered them...but they haven't updated any of the extras on them, and most film buffs have bought the major horror titles several times over already.

With this release it appears that Shout Factory intends to pick up the slack (this set is labeled "Volume 1", after all). The four titles in this set--the 1934 THE BLACK CAT, the 1935 THE RAVEN, THE INVISIBLE RAY, and BLACK FRIDAY--have never been put on Blu-ray in America, and they have never been presented on home video with so many choice extras.

The 1934 THE BLACK CAT was the very first Karloff-Lugosi pairing, and many say it's their best overall. It's a wild Pre-Code tale of devil worship, necrophilia, and madness. The 1935 THE RAVEN gives Lugosi one of his best showcases, and in some ways the movie is even loonier than THE BLACK CAT. The 1936 THE INVISIBLE RAY isn't put on the same level as the first two Karloff-Lugosi titles, but it's quite underrated, and it has more of a budget and a more expansive script. BLACK FRIDAY is harbinger of what the Universal Silver Age of horror films would be--it's fast paced and full of incident, but it lacks atmosphere and those special moments that dominate the Universal thrillers of the 1930s.

Each film gets its own disc in this set (remember those notorious Universal DVD sets which would cram as many films as possible on each side of one disc??). All four films do look better than usual, but I wouldn't say they look exemplary. It does have to be pointed out that these films are all over or around 80 years old, and in black & white, so...how much better can you really make them look? According to the packaging, the prints of THE RAVEN, THE INVISIBLE RAY, and BLACK FRIDAY all come from a new 2K scan of the original film elements. In my opinion THE INVISIBLE RAY looks the best of all, while the blacks on BLACK FRIDAY are very, very black (and no, I'm not making a silly joke about that film's title). The sound quality is excellent on all four features.

All four films get plenty of extras. All together, there are six new audio commentaries, featuring such horror film history heavy hitters like Greg Mank, Tom Weaver, and Gary Rhodes. THE BLACK CAT and THE RAVEN get two commentaries each, while the other two films in the set receive one. I have to admit that the only commentary I have been able to listen to yet is Greg Mank's for THE BLACK CAT, but he was magnificent as always.

Running through the entire set is a worthy four-part documentary entitled A GOOD GAME: KARLOFF & LUGOSI AT UNIVERSAL. Each part is about 20 minutes long and focuses on a particular movie in the set. Gary Rhodes and Greg Mank are the talking heads in the documentary--Rhodes focuses on Lugosi, and Mank on Karloff. Both men are experts on the duo, and they downplay all the fanboy legends about a supposed Karloff-Lugosi rivalry.

Each movie gets a lengthy still gallery, and sprinkled throughout the set are trailers and radio appearances by Lugosi and Karloff. The disc for THE BLACK CAT also has an hour-long documentary examining the history of Poe adaptations on the screen entitled DREAMS WITHIN A DREAM: THE CLASSIC CINEMA OF EDGAR ALLAN POE. It's a fine program, and it was written by Steve Haberman and directed by Constantine Nasr. The set also comes with a booklet containing stills and advertising artwork from the four movies.

I really don't have as many of the classic Universal horror movies on Blu-ray as one might think. For one thing, I've bought these things way too many times over already, and the same old extras get slapped on them. There's also the fact that Svengoolie features the Universal monster classics on his program constantly. But this Shout Factory set did get my hard-earned money, due to the many extras and the people that were behind them. The titles on the second Shout Factory Universal set are...okay, nothing spectacular, and the just-announced extras for them are a little thin, so I don't know if I'll get that one. But I do recommend this first Universal Horror Collection. This set is important for classic monster movie fans, since it showcases Karloff & Lugosi.