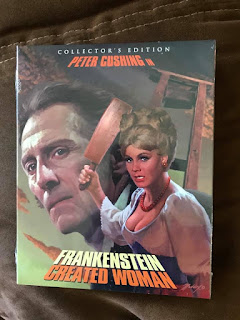 FRANKENSTEIN CREATED WOMAN has been on home video several times. It was released on A region Blu-ray by Millennium in 2014. That version featured a number of extras and a set of collectible cards as well.

This Shout Factory edition also has new extras, and a fabulous cover design by Mark Maddox. But where it really ups the ante is in the picture quality. FRANKENSTEIN CREATED WOMAN, in its earlier home video releases, has always had a pale look to it. This Shout Factory release has richer, deeper colors, and much more detail. I know it's generic to say "It's the best I've ever seen it look"--but it all honesty it is.

Shout Factory's extras include a brand new commentary with Steve Haberman and Constantine Nasr. It's an excellent one, as the duo spend a lot of time analyzing director Terence Fisher's cinematic style. They also use a copy of the original script to gain insight on the production. There's a short interview with actor Robert Morris, who played Hans, and another brief talk with crew members Eddie Collins and Joe Marks. I wish both programs were longer--the one with Collins and Marks in particular is informative, as it gives a true behind-the-scenes look at Hammer Films.

There's an extensive still gallery, trailers, and TV and radio spots, two "World of Hammer" episodes on the Frankenstein series and Peter Cushing, and the "Hammer Glamour" documentary is trotted out again. The audio commentary which was featured on the Millennium Blu-ray of this title is included, and it is still worth listening to, as it involves actors Robert Morris, Derek Fowlds, and Hammer expert Jonathan Rigby.

This Blu-ray also has reversible cover art, featuring a poster design from the movie's original release, and those who pre-ordered the disc directly from Shout Factory received a 18 x 24 poster of the Mark Maddox cover design.

I don't like buying movies over and over again on home video--it seems as if I've been doing that way too much lately. But the visual quality alone makes it a worthy purchase, along with the Mark Maddox poster. At least Shout Factory is giving fans major reasons to buy these movies over again, and they've got plenty of Hammer product on the way in the future.