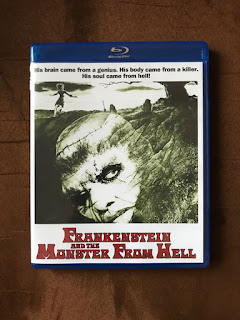 Another Region A Hammer Blu-ray from Shout Factory--this time it is FRANKENSTEIN AND THE MONSTER FROM HELL. Made in 1972 but not released until 1974, this was the last Frankenstein film made by Hammer, the last time Peter Cushing played the role of Baron Frankenstein, and the very last film ever directed by Terence Fisher.

FRANKENSTEIN AND THE MONSTER FROM HELL was also Hammer's last truly effective Gothic tale. Fittingly, the movie has a bleak and forlorn aspect to it, with a brownish-grey color palette. Somewhere in Europe, sometime in the 19th Century, a young Dr. Helder (Shane Briant) is sent to an asylum due to his experiments with corpses. Helder soon finds that his medical idol, Baron Frankenstein (Peter Cushing) is also at the asylum, posing as the facility's doctor. Helder also learns that the Baron is using the asylum's patients to provide parts for his latest creation. Helder assists the Baron in this latest endeavor, but despite giving this misshapen beast (David Prowse) the brain of a professor, the ultimate result is violent death--as it has been throughout Frankenstein's lifetime.

One thing I need to point out right away about this Blu-ray is that it is the 1974 American theatrical release of the movie by Paramount. It is NOT the uncut British version of the film. This has ticked off a lot of people on the internet. When Shout Factory announced they were going to give FATMFH an American release, I was hoping it would be the uncut version. It's not, and that's disappointing....but I'm not going to go crazy over it (heaven knows there's plenty of other major problems going on in the world already). The missing footage is basically a few more extra bits of gore. The thing is, FATMFH is pretty gory even in its edited state. The gore is combined with a dark and somewhat strange sense of humor from John Elder's script.

Peter Cushing's Baron is icily precise as always, but there's a sense here that he's basically come to the end, and he hasn't really accomplished much of anything. As Bruce Lanier Wright aptly puts it in his book NIGHTWALKERS, "Frankenstein seems trapped on a treadmill, an endless loop of pointless suffering and cruelty." Shane Briant, giving another of his typically quirky performances, at first seems very much like the younger Baron we saw in THE CURSE OF FRANKENSTEIN. But his Helder eventually realizes that there isn't much to admire about Frankenstein (except perhaps his obsessive persistence).

Terence Fisher handles the material in a way that no other director working for Hammer in the early 1970s ever could. Fisher may not have had a "modern" sensibility, but he knew how to get his point across with quiet shot compositions and expert editorial style. He also knew how to let actors carry the scene, and there's plenty that do it here, including old Hammer hands Charles Lloyd Pack, Patrick Troughton, Peter Madden, Sydney Bromley, and a cameo from an almost unrecognizable Bernard Lee. Dave Prowse is restricted by an ugly body suit and mask (which looks even worse on razor-sharp Blu-ray), but he still is able to make the audience identify with and understand the monster's plight. At first viewing one might think that Madeline Smith is stuck with a boring part as the exquisite but mute Angel, an inmate who assists the Baron and Helder. Smith actually makes more of an impression than most of the busty babes Hammer used in their other films made during the same period.

Shout Factory's Blu-ray of FRANKENSTEIN AND THE MONSTER FROM HELL is presented in a 1.85:1 aspect ratio. It is a crisp-looking transfer, but I personally thought it looked rather dark overall.

This Blu-ray doesn't have as much extras as other Shout Factory Hammer releases. There's no Mark Maddox cover artwork, or no alternate aspect ratios. "The Men Who Made Hammer" series continues, with Richard Klemensen from LITTLE SHOPPE OF HORRORS this time discussing Hammer executive Roy Skeggs, who started with the company as an accountant and wound up running it when it was barely surviving. Mr. K's talks are always entertaining and informative, and he adds his own personal recollections.

There's a new audio commentary from the now-expected Steve Haberman and Constantine Nasr. It's one of their best, as the duo discuss Terence Fisher's style, the state of Hammer when the movie was made, and how the closed-in asylum setting is sort of a purgatory for the film's characters. An older commentary is included with Madeline Smith, David Prowse, and Jonathan Sothcott, and it's a treat to listen to Smith and Prowse relate their memories about the production. There's also a trailer and a very silly radio promo.

I know some will dismiss this disc because it is not the unedited version....but I think this is still a decent Shout Factory release. Now the only Hammer Frankenstein film not on Region A Blu-ray is THE CURSE OF FRANKENSTEIN.