Director Jacques Tourneur is best known for making film noirish black & white thrillers such as CAT PEOPLE and NIGHT OF THE DEMON, but he also worked on a number of colorful Westerns. Tourneur directed genre star Joel McCrea multiple times, and one of their collaborations was WICHITA, a 1955 production in Cinemascope concerning Wyatt Earp.

Earp is played by Joel McCrea, although it's more accurate to say that McCrea is really playing another variation on his typical heroic Westerner role. This Wyatt Earp is one of the most virtuous and clean-cut versions of the man in movie history.

The film starts out with Earp arriving at Wichita, Kansas, hoping to start his own business with money he's saved up from hunting buffalo. The town of Wichita is trying to establish itself as a railhead for cattle drives, and an attitude of "anything goes" is in the air. Wyatt just wants to stay out of trouble and keep to himself, but he winds up stopping a bank robbery. The leading citizens of Wichita attempt to convince Earp to become town marshal, but he wants nothing to do with the job. When a wild group of drovers kill a five-year old boy while shooting up the town, Earp changes his mind. The new marshal immediately bans all firearms within the city limits, and makes it known that he will not tolerate any violence, even if it means hurting the local economy. The same leading citizens who wanted Earp to take the job now want him out, but he refuses to back down.

WICHITA is a okay Western, but it's quite predictable. As soon as Wyatt starts talking about how he doesn't like violence, you know exactly what is going to happen. McCrea uses his quiet determination and his solid as a rock persona to lay down the law in Wichita. There's more talk here than action. The subplot about what ordinary citizens are willing to accept to obtain order and security is a good one, but it isn't developed enough. The incident of a hero taking up a badge due to the killing of a young boy is very much like what happens to Errol Flynn in DODGE CITY.

WICHITA is enlivened by the supporting cast. Vera Miles plays Earp's love interest, a prim and proper young lady who is the daughter of one of the town's leading businessmen. (The real Wyatt Earp's personal relationships were far more complicated.) Mae Clarke plays Miles' mother, and there's a number of other notable character actors, such as Lloyd Bridges, Wallace Ford, Edgar Buchanan, Robert Wilkie, and Jack Elam. 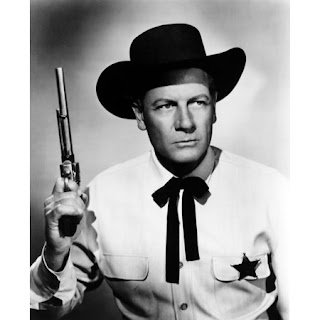 
Keith Larsen plays a very young (and hot-headed) Bat Masterson, who in this film Wyatt Earp becomes a mentor to. (Ironically Joel McCrea would play Masterson a few years later in THE GUNFIGHT AT DODGE CITY.) Peter Graves plays Morgan Earp, and the unexpected way that Wyatt's brothers are introduced is one of the highlights of the story.

For those interested in Jacques Tourneur, there's nothing in the film that I would say is particularly significant. WICHITA is very much a standard Western, specifically designed for McCrea. In my opinion Tourneur's best Western is the dark and moody CANYON PASSAGE, a film I highly recommend.
Posted by Dan Day, Jr. at 12:30 PM