NO MAN OF HER OWN 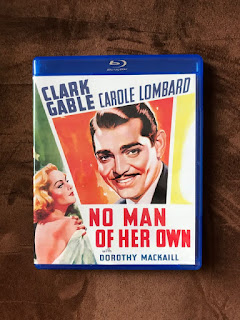 The final film in the three-disc Kino Carole Lombard Blu-ray set I am reviewing is NO MAN OF HER OWN, a 1932 Paramount production. This movie is famous for being the only onscreen pairing between Lombard and Clark Gable, long before they became an item in real life.

Gable plays Jerry "Babe" Stewart, a con artist and gambling cheat. Stewart's activities have attracted the attention of the New York City police, so he decides to hide out in the sticks for a while. In a bucolic spot called Glendale, Stewart comes across the very attractive Connie (Carole Lombard), a librarian who is exasperated with small town life. Stewart desires Connie, and on a coin flip, he decides to marry her. He takes her back to New York, but he doesn't intend for the marriage to last--or his gambling lifestyle to change. But Connie is no naive fool, and she finds out how Stewart makes his living. Stewart begins to realize that Connie is indeed worth changing his ways over.

Out of all the films in the Kino Lombard box set, NO MAN OF HER OWN is by far the best. It has a vibrant pace and spunk to it, and Gable and Lombard work very well onscreen together. The role of Jerry Stewart is perfect for Gable--a brash, independent-minded handsome rogue who expects to get his way at all times, but is brought down to earth by a strong woman who is willing to stand up to him. Gable's best attribute as an actor was that he could play men who were basically jerks, yet still be likable and entertaining to an audience. Lombard's small-town librarian isn't meek or weak--she may be attracted to Gable's Stewart but she more than holds her own against him. The actress is very natural and self-assured here, and her sarcastic byplay with Gable carries the story. (The role of Connie was originally supposed to be filled by Miriam Hopkins.)

Gable and Lombard are just about the whole show here, but early 1930s star Dorothy Mackaill gets attention in a important but small role as Stewart's sexy former partner in crime. Pre-Code fans will appreciate the fact that both Mackaill and Lombard appear in lingerie.

NO MAN OF HER OWN is a nice programmer, but the climax wraps things up a bit too tidily. Nevertheless, it remains one of Carole Lombard's best pre-TWENTIETH CENTURY performances, and it makes one wonder what might have resulted if Gable and Lombard had worked together on a film with a more notable director than Wesley Ruggles and with a less generic script.

Kino presents NO MAN OF HER OWN (which has been released on DVD before by Universal) in a 1.37:1 aspect ratio, and it is the best looking of all the movies in the Carole Lombard set. A brand new audio commentary is included featuring Nick Pinkerton. He spends most of his talk giving out biographical information about the cast & crew, but he does mention that the movie was originally based on a novel by Val Lewton, and he explains how Gable was loaned to Paramount.

Now that I've looked at all three films in the Kino Carole Lombard Blu-ray set, how do I feel about it overall??

First of all, it's great that Kino decided to put this out, and that they have plans to produce more sets revolving around the actress. I hope that future sets focus on Lombard movies that have never been officially released on home video. It's nice that Kino put a couple audio commentaries on this set, and I hope they continue to do that....but I also hope that they choose people who will be a bit more Lombard-centric in their talks.

Out of the three films in this set, I had already owned two of them on DVD. Carole Lombard is my favorite actress of all time, so I probably would have bought this set no matter what. I do recommend it, but I hope that if there are later sets, we are exposed to some rare Lombard performances, and we get more extras involving true Lombard experts. 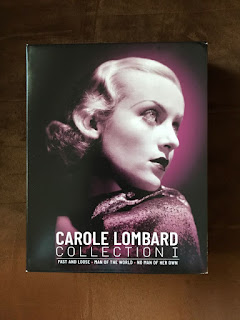