THE EUROCRYPT OF CHRISTOPHER LEE COLLECTION On Blu-ray From Severin 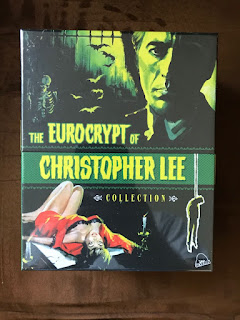 THE EUROCRYPT OF CHRISTOPHER LEE COLLECTION collects five rare and somewhat obscure films that were made in continental Europe and featured Lee. The set also includes a 24-episode TV series produced in Poland called THEATER MACABRE, in which Lee did the hosting duties for each story. And...there's a 100-page booklet on Lee's European film adventures by genre expert Jonathan Rigby.

The five films are SHERLOCK HOLMES AND THE DEADLY NECKLACE, CRYPT OF THE VAMPIRE, CASTLE OF THE LIVING DEAD, CHALLENGE THE DEVIL, and THE TORTURE CHAMBER OF DR. SADISM. Each movie gets its own disc case, with special cover artwork specifically for this release. Each movie also gets plenty of extra features, ranging from new audio commentaries, trailers, featurettes, etc. CASTLE OF THE LIVING DEAD comes with a CD containing the original music soundtrack composed by Angelo F. Lavagnino.

CHALLENGE THE DEVIL contains an extras disc called RELICS FROM THE CRYPT, which contains a number of interviews of Lee throughout his life. RELICS FROM THE CRYPT also contains a 1964 Swiss documentary short called HORROR that has jaw-dropping behind the scenes footage from THE GORGON and THE MASQUE OF THE RED DEATH, along with interviews of Lee, Boris Karloff, and makeup man Roy Ashton. 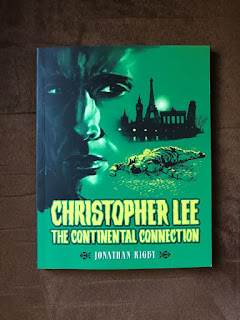 The 100-page booklet is NOT just a cut-down version of Jonathan Rigby's earlier volume on Lee's screen career. The booklet thoroughly examines the films Lee made in Europe, while placing them in context with the rest of the actor's work. There's also plenty of great stills here, most of which I've never seen.

I've only had this set for a few days, so needless to say, I've barely scratched the surface of it. Eventually I will be doing blog posts on each individual film, and the extras accompanying it....but it's going to take me plenty of time to get to everything here. But I'm certainly going to have fun delving into this set.

Any one who reads this blog knows how much of a fan I am of Christopher Lee. I ordered this set as soon as I found out about it, and I'm sure it will make my Top Five releases of 2021 list. Some may quibble with the titles included here--but for my sake that's what makes this set so enticing. These movies have basically never gotten the true high end treatment on home video, especially for the North American market. These are not a bunch of Hammer films being put out on Blu-ray for the third or fourth time--these are productions that even the most hardcore of Lee fans (such as myself) have very little experience with, if any. Home video is at its best when it showcases this type of product, and Severin has knocked it out of the park with this set.