TIMESLIP (AKA THE ATOMIC MAN) 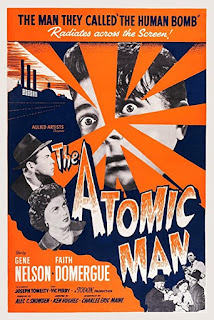 TIMESLIP is a 1955 British science-fiction film known as THE ATOMIC MAN in the U.S. There's not much sci-fi here--the movie is more a tale of Cold War industrial espionage.

A man is dragged out of the Thames, with a bullet in his back. Doctors save the man, but for seven and a half seconds he is clinically dead on the operating table. The police have no idea who the man is, but a noisy magazine reporter named Delaney (Gene Nelson) recognizes him as esteemed scientist Steven Rayner (Peter Arne). However, another man claiming to be Steven Rayner is working at a nearby research facility--and he looks exactly like the man pulled from the Thames. The mysterious man from the river gives strange answers to the questions the authorities put to him, and it is soon discovered that the man is seven and a half seconds in the future--exactly the same amount of time he was "dead" while being operated on. Delaney and his photographer girlfriend (Faith Domergue) continue to investigate, and find that the real Rayner is a pawn in a scheme to protect the finances of a large corporation.

TIMESLIP tries to have a Quatermass-like feel, with black & white shadowy compositions, and a reality based look at a fantastic situation. The lead character, however, isn't a crusading scientist, but the annoying reporter played by Gene Nelson. With his Leo Gorcey-style hat, trench coat, and brash personality, Nelson here resembles a character from a 1930s or 1940s Poverty Row feature. In the climax Nelson's Delaney turns into an action hero, taking on all the bad guys by himself--a sequence that is hard to buy into. Science-fiction stalwarts such as Richard Carlson or Richard Denning would have been a much better choice for the role of Delaney.

Faith Domergue has very little to do in this film, other than be constantly exasperated by Delaney (an attitude no doubt shared by the audience). One wonders what her character even sees in the guy. None of the supporting cast get much of a chance to shine, but Vic Perry as the main bad guy does have a resemblance to Laird Cregar. "Carry On" veteran Charles Hawtrey and Paul Hardtmuth, who played Professor Bernstein in THE CURSE OF FRANKENSTEIN, have small roles.

The premise of a man existing seven seconds ahead in the future is an intriguing one, but the script for TIMESLIP doesn't make effective use of it. The explanation for why Rayner has this condition actually comes off pretty well (hint--it has to do with radiation). The film should have spent much more time on Rayner's status instead of Delaney's antics. TIMESLIP is unique in that the bad guys are working for a major corporation, instead of being aliens or spies from a foreign power.

TIMESLIP was directed by Ken Hughes, who would go on the make a few notable big-budget pictures in the 1960s, such as CHITTY CHITTY BANG BANG. He didn't have much of a budget here--there's no major special effects sequences, and the sets are very standard for the 1950s. The story would have served better as the basis for an episode of a TV anthology series.