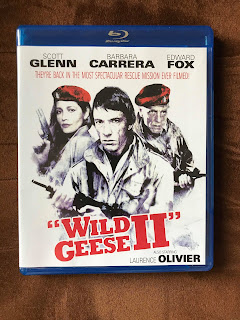 Made in a decade known for outlandish, cheesy action flicks, WILD GEESE II (1985) is a rather straightforward adventure/espionage tale that might have been more entertaining if it had been cheesier.

In 1982, a large news network hires mercenary John Haddad (Scott Glenn) to spring Rudolf Hess (Laurence Olivier) out of Spandau Prison in Berlin. The network executives believe the elderly Nazi Hess has plenty of secrets to reveal. Haddad reluctantly takes the job, accompanied by a network producer (Barbara Carrera). Haddad gathers a team together, including his close friend (Edward Fox). But there's plenty of others who want to use Hess for their own ends, and Haddad also has old enemies gunning for him.

The original 1978 THE WILD GEESE was a financial hit for producer Euan Lloyd, and he had long wanted to do a sequel. Lloyd had even signed up Richard Burton to reprise his role from THE WILD GEESE, but the actor died right before production was to begin. Edward Fox was brought on, but instead of playing Burton's role, he plays Burton's brother (honestly the character could have been anybody).

WILD GEESE II is competently made, but there's nothing in it that particularly stands out, other than the plot and the cast. Robert Webber plays a network executive, Patrick Stewart has a small role as a Russian general, and Ingrid Pitt is one of Haddad's enemies (her character is billed as "The Hooker"). Laurence Olivier doesn't show up until the very end, portraying a feeble and confused Hess. Scott Glenn overdoes the "inscrutable taciturn action hero" bit, so much so that it's hard to get all that worked up over what happens to him.

It's also hard for a viewer to get all that worked up over the main characters' goal of breaking a notorious Nazi out of prison. There's plenty of complications put in Haddad's way (the author of the book the original THE WILD GEESE was based on, Daniel Carney, and that film's screenwriter, Reginald Rose, provided the story here as well). Seemingly everyone in Berlin knows what Haddad is up to, and wants to either help or hinder him. There's even a unlikely romance between Glenn and Barbara Carrera (they even get a bedroom scene together). All of these things just slow the movie down--it clocks in at a little over two hours.

WILD GEESE II was directed by Peter Hunt, with cinematography by Michael Reed. The duo had done the same chores for ON HER MAJESTY'S SECRET SERVICE, a movie much better than this one. WILD GEESE II isn't bad, but it's a very standard outing for an era dominated by Stallone, Schwarzenegger, and Cannon Films. The movie does make extensive use of various Berlin locations--this is a great time capsule of what the city was like in the 1980s before the Wall came down.

Kino claims that the transfer used for this Blu-ray comes from a brand new 2K master, but from my point of view the picture quality looks a bit flat. The movie is presented in a 1.85:1 aspect ratio.

The main extra is a new audio commentary featuring Steve Mitchell and Howard S. Berger. The duo are fans of the film, and they point out how different it is from most action thrillers of the era. A trailer for the film is included as well, narrated by Patrick Allen.

WILD GEESE II is really just a sequel in name only--it has very little in common with THE WILD GEESE. Film buffs will be more interested in the cast and crew, while fans of Cold War era-adventure tales should note that there's not much high-powered action in it.