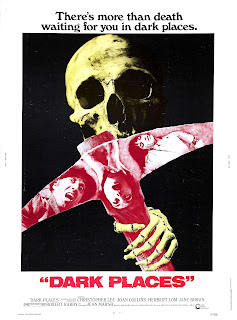 Until recently, I had only seen this 1973 film once--on a "CBS Late Night at the Movies" broadcast, probably sometime in the 1980s. I didn't remember much about it, other than I was disappointed with Christopher Lee's small role. My latest viewing of DARK PLACES didn't improve my judgement of it.

An old man named Andrew Marr dies at an English asylum, and he leaves his abandoned manor to an Edward Foster (Robert Hardy). Foster finds out from the late man's solicitor (Herbert Lom) that Marr may have hidden over 200,000 pounds somewhere on the estate. Marr's old residence is reputed to be haunted--the man's wife, two children, and a governess were presumed to have been murdered there. Edward intends to fix the place up, while searching for the loot. A local doctor (Christopher Lee) and his sister (Joan Collins) want the money as well--the sister starts to seduce Edward. Strange occurrences start happening inside the house, and Edward begins to have flashbacks in which he "becomes" Andrew Marr in the past. Is someone trying to drive Edward mad--or is he loony to begin with?

DARK PLACES has a lot of notable actors in the cast, and it is directed by Don Sharp, who made a number of excellent English Gothic films in the 1960s. But the film's script is very thin--it feels more like an episode of a British TV mystery show than a full-fledged feature. Lee and Lom have very little to do (their parts could have been played by anybody). Collins gives another one of her patented "conniving tease" performances.

For better or worse, this is Robert Hardy's show. The problem is that Edward Foster is not an engaging enough character to maintain a viewer's interest (he's as mysterious as the main story). There's a lot of footage of Hardy wandering around the Marr house, reacting to things that can't be seen. Hardy also plays the younger Andrew Marr in the flashback scenes, which are confusing. (In these sequences Jean Marsh plays Marr's wife, and Jane Birkin plays the young governess Marr is having an affair with.)

The flashback scenes seem to suggest that Edward is somehow possessed by Marr's spirit, but this isn't made very clear. It's also never explained why Edward looks exactly like the painting of a younger Marr that hangs inside the manor. I expected a twist ending where a rational explanation is given for all the events, but it never comes. The climax provides more questions than answers.

There was one thing about DARK PLACES that stuck out for me. At one point Edward is breaking through a wall, searching for the money, when a group of fake bats fly out of it. I immediately thought of the climax of another, more famous Don Sharp-directed film--Hammer's THE KISS OF THE VAMPIRE.

Considering all the talent involved in it, DARK PLACES should have turned out to be a much better film.