NIGHT OF THE EAGLES 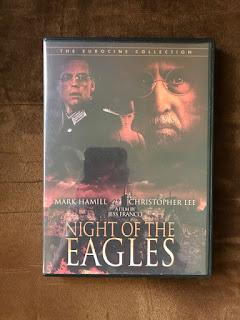 Top-billed Christopher Lee plays Walter Strauss, a proud, successful German businessman. The year is 1939, and Strauss believes the coming war will make his country rich and powerful. Strauss' young attractive daughter Lillian (Alexandra Erlich) is torn between two men who are in love with her--Peter (Mark Hamill), who is already in the military, and Karl (Ramon Estevez, billed as Ramon Sheen), a composer who has no love for war. Peter and Karl are both sent off to fight on the Eastern front, while Lillian, after a brief stint as a cabaret performer, joins the military to contribute to the war effort. Lillian experiences a number of horrible events while near the front lines, while also becoming estranged from her father. Peter and Karl both come to tragic ends, as does the Strauss family and the Third Reich.

Jess Franco directed and co-wrote this film, so one would naturally expect a lurid Naziplotation flick--but this isn't. The movie is one of the more "normal" stories Franco ever made (this film could play uncut on prime time American TV). The more rabid among the director's fans would no doubt say that it's too normal. The movie revolves around Alexandra Erlich as Lillian, and what happens to her is standard melodramatic stuff. Even the scenes of her as a cabaret performer are rather generic (especially for a director like Franco). Erlich isn't terrible--she's better than the script--but she's no Marlene Dietrich, and she doesn't have the screen presence of legendary Franco leading ladies such as Maria Rohm and Soledad Miranda.

Christopher Lee gives a serious, committed performance as a distinguished German patriarch who sadly sees his entire world slowly crumble around him. One wishes Lee had more screen time--his character is far more interesting than anyone else in the story. Mark Hamill comes off better than expected, although seeing him decked out in a German military uniform is disconcerting. The major weak link in this film is Ramon Estevez (Martin Sheen's other other son), who is totally unconvincing as a WWII era German.

One would assume that Jess Franco wanted NIGHT OF THE EAGLES to be a serious WWII drama, but he didn't have the budget to pull it off. The war scenes in this picture appear to come from other films, and they are haphazardly edited into the main story. A number of extras and background characters have 1980s hairstyles and wear 1980s fashions, while accents are all over the place (I'm sure most of the dialogue was dubbed in). Franco does have to be given credit for not portraying any of the main characters as goose-stepping over-the-top maniacs--for the most part they are believable human beings (of course in today's political climate some might say that's a detriment). NIGHT OF THE EAGLES is also known as LA CHUTE DES AIGLES and FALL OF THE EAGLES (the latter is a much more fitting title).

A company called Full Moon Features has released NIGHT OF THE EAGLES on both DVD and Blu-ray. I purchased the DVD version from Edward R. Hamilton Booksellers at a discount price. The disc case claims that the transfer is totally uncut, and remastered from the original 35mm camera negative. The movie looks very inconsistent here--some sequences are better than others, and the stock footage stands out like a sore thumb. The film is presented in a 1.78:1 aspect ratio, and some of the shot compositions seem a bit off (insert your own "Well, Jess Franco was the director" joke here). The running time is 85 minutes--as with any Franco film, your guess is as good as mine on whether it is the "uncut" version.

Two sound mixes are offered--5.1 and 2.0 stereo. I watched the film with the 5.1 mix, and if anything it exposed the weakness of the material--there's an audible hiss that runs throughout the entire film. The DVD had no extras pertaining to the title. This is a feature that cries out for an informed audio commentary, as I'm sure it had a complicated production history.

I knew absolutely nothing about NIGHT OF THE EAGLES before I watched it for the first time. In his book on Christopher Lee's film career, Jonathan Rigby only gives it a brief mention. I also own a couple books on WWII movies that make no mention of it at all. It will get some attention due to the presence of Lee and Mark Hamill, but the two men are only together in a brief scene, and I don't think they even exchanged dialogue. One assumes that since this is a Jess Franco movie, it will be either outlandish or ridiculous--but this is merely mediocre.