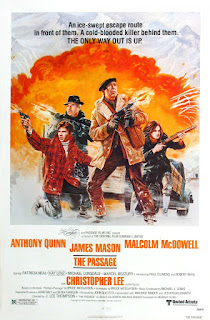 THE PASSAGE is another one of those 1970s international productions that have a action-war element to the storyline and a star-studded cast. It was directed by J. Lee Thompson, who had made two excellent WWII films--ICE COLD IN ALEX and THE GUNS OF NAVARONE. THE PASSAGE is a far cry from those films, and despite the poster above, it's not a battle-filled exciting adventure.

Sometime during the Second World War, a Basque sheepherder (Anthony Quinn) is hired by the French Resistance to guide an American professor wanted by the SS (James Mason) and his family through the mountains into Spain. The shepherd doubts the plan will succeed--the Professor and his wife (Patricia Neal) are elderly, and their son and daughter (Paul Clemens and Kay Lenz) are not very enthusiastic. Nevertheless the shepherd risks his life to bring the family to safety, all the while trying to stay one step ahead of a fanatical SS officer (Malcolm McDowell) determined to catch them.

THE PASSAGE tries to be a nail-biting thriller, but whatever suspense there might have been is ruined by Malcolm McDowell's ridiculously bizarre performance. One expects a bit of weirdness whenever McDowell shows up on-screen, but he's so loopy here that one wonders whether the actor thought he was appearing in a Mel Brooks movie.

The film is also hurt by the fact that we get almost no information about the main characters--we never even learn the shepherd's name. We are never even told why the SS is so obsessed over capturing an old, tweedy professor. Because of this, the viewer isn't able to get fully involved in the characters' plight.

Quinn's shepherd is helped along the way by a French Resistance member played by Michael Lonsdale and a gypsy camp leader played by Christopher Lee. Both men receive a horrible fate from McDowell's SS officer. Lee gets special billing in the credits, but his fans will note how small (though important) his role is. (I'm sure that Lee at least was happy that he didn't have to play a Nazi this time).

Quinn, Mason, and Neal are all very good, but it's hard for them to make an impression when so much of the film is focused on McDowell and his psychotic antics. The SS officer gets to torture people and he also gets to rape the professor's daughter in a sequence that is crass and unnecessary.

Michael Reed (THE GORGON, ON HER MAJESTY'S SECRET SERVICE) was the cinematographer on this film, but the visuals do not resemble his earlier efforts. For most of the time the picture looks dark and murky, and there is a lot of handheld camera work. (I do have to say that I viewed this film on the Tubi streaming channel, but it was a decent uncut widescreen print.) Michael J. Lewis does provide a music score which harkens back to the WWII action-adventure films of the 1960s. Maurice Binder, who is best known as the creator of most of the title sequences for the James Bond films, was an associate producer on this movie.

THE PASSAGE does feature some impressive Pyrenees locations, but the film is notable for all the wrong reasons. If it didn't have so many gratuitous elements, and a more realistic portrayal of the main villain, it might have turned out to be a decent WWII melodrama.