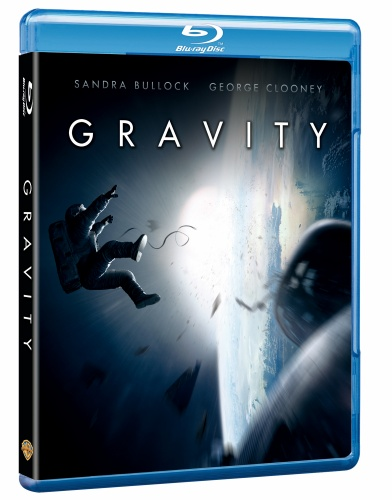 Last fall I wrote a blog post on how impressed I was upon seeing GRAVITY on the big screen. I was hoping that when the movie came out on home video, there would be supplements and extra features explaining how the production was made. Most Blu-rays of recently released films have very little extra content, and usually that content is nothing more than promotional fluff pieces.

I'm happy to say that the standard (non-3-D) Blu-ray version of GRAVITY has about three hours of features detailing all the work that went into making the film. All of this information is pretty fascinating to a film geek like me. Most of what takes place in GRAVITY is CGI-rendered--but it is CGI with a purpose. The CGI serves the story, not the other way around. Various new FX techniques were used in the making of GRAVITY, including practical elements such as brand-new wire rigging.

For the most part the extra features avoid the typical routines such as people sitting on the set saying things like "I'm so impressed with the director's vision!" and "This is such a great project!!". There is some of that when Sandra Bullock and George Clooney are talking (I'm convinced that actors have trained themselves to say the same exact things for any Blu-ray/DVD documentary). There's a lot of technical stuff involved, but the features are done in such a way that the general audience can understand and appreciate what had to be done to get the story filmed properly.

GRAVITY of course looks fantastic on Blu-ray, but it is still a film meant to be seen in a theater. Anyone who loves this film and wonders how it was produced should pick up this Blu-ray. I get the feeling, though, that if GRAVITY cleans up at the Oscars, there's going to be a future super-duper home video release with even more extras and background material. It's too bad that Cinefantastique magazine doesn't exist anymore--GRAVITY would have been perfect for an all-issue special.