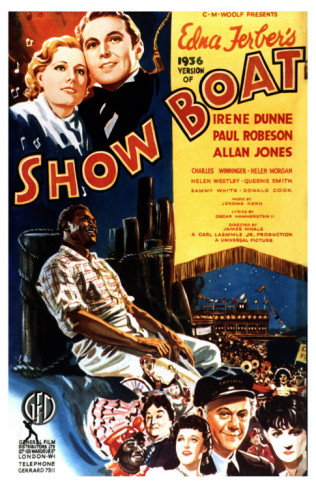 One of the films most requested to be released on DVD is Universal's 1936 version of the famed Broadway musical, SHOW BOAT. The Warner Archive Collection has now made a lot of film buffs happy by finally putting out the movie through their made-to-order line.

SHOW BOAT had already been made once by Universal in 1929 as a silent with some talkie sequences (I'd love to watch that version just to see how they tried to pull that off). Universal went out of its way to make the 1936 version a super-spectacular. The studio gave the project to its top director, James Whale (best known for FRANKENSTEIN and BRIDE OF FRANKENSTEIN), and cast several stars who had made appearances on the stage version of SHOW BOAT at one time or another.

I'm not exactly an expert when it comes to movie musicals, but aficionados of the genre consider the 1936 SHOW BOAT the best out of all three total film versions of the story, and some believe it is one of the best cinematic musicals of all time.

When MGM made their own version of SHOW BOAT years later, they bought the rights to the other versions, and the 1936 production became almost a lost film (the same thing happened to Universal's and James Whale's film of WATERLOO BRIDGE when MGM remade that as well). TCM has shown the '36 film from time to time, but fans have been clamoring for its home video release for years. There were internet rumors that all three versions would be released as a Blu-ray set, but apparently that's not going to happen now.

Usually any product from the Warner Archive Collection is a DVD-R--which means that the quality will not be as good as a regular DVD. I'm happy to say that my copy of SHOW BOAT is a regular DVD. If you go to the Warner Archive ordering page for this film, it says that due to the anticipated high demand, initial orders will be traditionally pressed DVDs. So if you want to get a good copy of this, you'd better order it right away.

The Warner Archive site also says that SHOW BOAT has been remastered. The picture quality is okay, but the sound quality is excellent, even though it is in mono. There are no extras, which is a shame, because a movie like this calls out for something like a documentary detailing the history of its production, or at least an audio commentary from someone who is an expert on Universal Studios during the 1930s, such as Gregory Mank.

There's a ton of highlights in this musical....the songs of Oscar Hammerstein & Jerome Kern, the performances of Irene Dunne (who should have been nominated for an Oscar) and Helen Morgan, and of course the justly celebrated rendition of "Ol' Man River" by Paul Robeson. But it is the brilliant work of James Whale that puts this movie over the top. For example, the "Ol' Man River" sequence would be stunning just for the singing of Robeson alone--but Whale's visual staging makes it one of the greatest moments in movie musical history. Whale himself should have been Oscar nominated for his directorial work here.

Kudos to the Warner Archive Collection for releasing this film, and extras kudos for also releasing it on to regular DVD (for a while, anyway). I predict it will wind up being one of the best sellers in the entire Warner Archive home video collection.