THE TOMB OF LIGEIA On Blu-ray 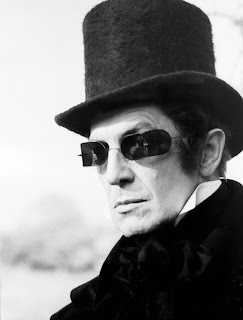 THE TOMB OF LIGEIA is the last film director Roger Corman made which was based on the works of Edgar Allan Poe. Corman's Poe adaptations, produced by American-International Pictures, were hugely successful during the first half of the 1960s. However, the filmmaker was getting tired of the Poe formula--he had already started tweaking it with doses of comedy (THE RAVEN) and shooting an entry in England (THE MASQUE OF THE RED DEATH). With THE TOMB OF LIGEIA Corman and his screenwriter Robert Towne would bring in more changes to the cinematic Poe cycle.

All of Roger Corman's other Poe films had been filmed totally in a studio. It was Corman's belief that Poe's world was a world of the mind, and real locations would not adequately present the atmosphere Corman was working toward. Art Director Daniel Haller played a major role in the look and feel of the Poe series, along with cinematographer Floyd Crosby. Composer Les Baxter's music also became associated with Poe and Corman.

Because THE TOMB OF LIGEIA was filmed in England, Corman was not officially able to use Haller as art director (even though Haller did help out with preparatory work). The cinematographer on LIGEIA was Arthur Grant, a Hammer Films veteran. The music was composed by Kenneth Jones.

The biggest "new" effect for THE TOMB OF LIGEIA was real location shooting. A 1000 year-old abbey in Norfolk was used, and a fox hunt sequence was part of the story. The abbey serves as the home of the morose Verden Fell (Vincent Price), who is deep in mourning over the death of his wife Ligeia.

Robert Towne's screenplay (which is set in the early 19th Century) has the spirited Lady Rowena Trevanion (Elizabeth Shepherd), bored over the fox hunt, discovering the ancient abbey. Rowena comes upon Ligeia's grave, and meets up with Fell. Rowena is intrigued by Fell, and the two marry--but Rowena soon learns that the most powerful force in the household is the memory of Ligeia.

THE TOMB OF LIGEIA is not really a straight horror film. It is a dark Gothic love story, in which the power of the will is the most important feeling. (Kenneth Jones' lush score contributes to the mood.) Ligeia's spirit is represented by a black cat (the cat spooks Rowena's horse at the beginning of the story, leading to her meeting with Fell). Like other movies such as REBECCA and LAURA (which Vincent Price appeared in), the unseen Ligeia hovers over all the other characters, and influences everyone's actions.

Because LIGEIA is basically a romance, Robert Towne had wanted a younger actor, such as Richard Chamberlain, to play the role of Fell. Of course, Towne must have known that there was no way Roger Corman and AIP were going to make a Poe movie without Vincent Price (THE PREMATURE BURIAL notwithstanding). During the 1964 filming of LIGEIA, Vincent Price was twice the age of his leading lady Elizabeth Shepherd. Despite this Price does an outstanding job. While Price's Roderick Usher is white-haired and pale, Verden Fell is dark-haired and black-garbed, and he almost always sports a pair of wrap-around dark glasses (see picture above). I've always thought those glasses are one of the best-looking movie props ever....but they also have a plot significance. Verden Fell has lost his ability to "see" things as they really are (and this will be taken to its ultimate end at the movie's climax, courtesy of that black cat). The gloomy Fell could only be played by Price--the actor was the human personification of Edgar Allan Poe's stories.

As for Elizabeth Shepherd, she gives what I think is the best female performance in a Poe/Corman/Price movie...it may even be the best female performance in any Roger Corman-directed movie. Corman knew that he needed more than just the typical AIP starlet for THE TOMB OF LIGEIA. When Elizabeth Shepherd was hired for the film, she was already an accomplished British stage actress. Her mature attitude and patrician bearing enabled her to more than capably hold her own when sharing scenes with Vincent Price. One of LIGEIA's highlights is a scene where Fell gives a demonstration of mesmerism using Rowena as a subject. During the demonstration the spirit of Ligeia takes command of Rowena--and Shepherd believably presents this all through acting, without any camera tricks or sound effects. It is Shepherd who carries the film--she has more screen time than Price does (she also "plays" Ligeia at the end of the story).

THE TOMB OF LIGEIA may be different in most ways from the other Poe/Corman/Price films, but it still has some similarities as well. There's a dream sequence, and Elizabeth Shepherd spends a fair amount of time wandering around in a nightgown. There's another one of Roger Corman's fiery climaxes, which means we get to see once again that "burning barn" footage first used in HOUSE OF USHER. (I don't know who actually owned that barn, but if the person that did had residuals on the footage that was shot of it, he or she would be a millionaire today.)

THE TOMB OF LIGEIA is the most accomplished film included in THE VINCENT PRICE COLLECTION II Blu-ray set. Unfortunately it is also the worst-looking of the bunch. The only thing that seems enhanced visually are the scratches on the print. This LIGEIA Blu-ray doesn't look all that much better than the "Midnite Movies" DVD of the title. This is fairly disappointing, especially considering that Arthur Grant did one of his best jobs as a cinematographer on the picture.

The major extra for the LIGEIA Blu-ray is a new audio commentary featuring Elizabeth Shepherd with Roy Frumkes. When I met Ms. Shepherd at the October 2014 Monster Bash, she went out of her way to tell me that I must listen to this commentary--she said "It's very good". The lady was right--the commentary is informative and entertaining, and Shepherd obviously did her homework. If you do have this Vincent Price set, or you are planning to buy it, make sure you play this special extra.

The Blu-ray also has commentaries from Roger Corman and film historian Constantine Nasr (yes, that's right...three different commentaries). A still gallery and a theatrical trailer are included as well. 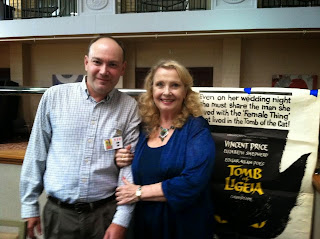 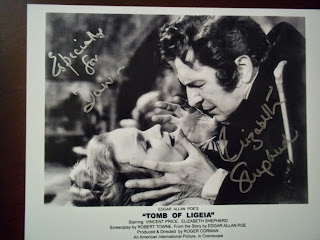