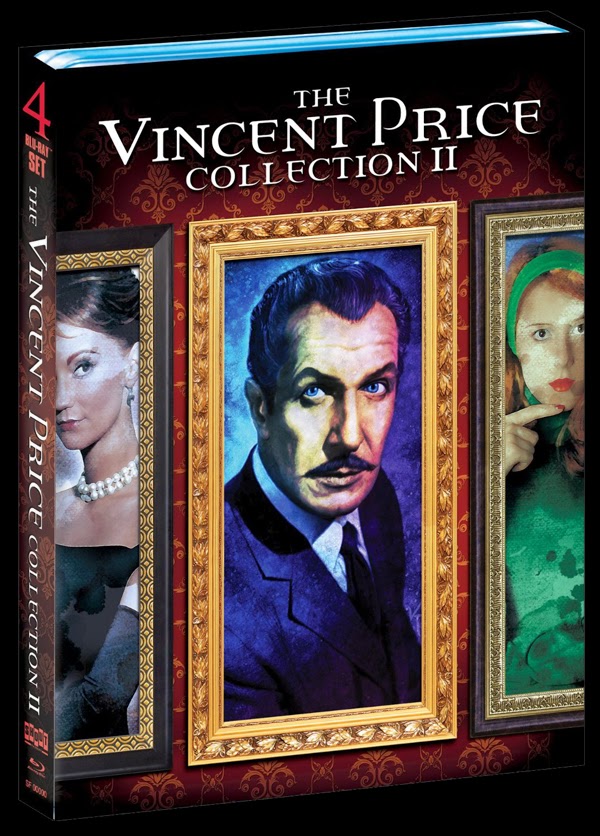 This set consists of seven movies on four discs. The first disc could be called the "comedy" disc, since it contains THE RAVEN and THE COMEDY OF TERRORS, two pictures which took the Vincent Price/Roger Corman/Poe formula and played it for laughs. THE RAVEN features not only Price but Boris Karloff and Peter Lorre as well.....and it even has a very young Jack Nicholson. THE COMEDY OF TERRORS was directed by Jacques Tourneur and written by Richard Matheson, and it also has Karloff & Lorre, along with Basil Rathbone.

The second disc has THE TOMB OF LIGEIA and THE LAST MAN ON EARTH. I'm going to do a separate blog on LIGEIA, since I met Elizabeth Shepherd a couple weeks ago. THE LAST MAN ON EARTH is based on Richard Matheson's acclaimed modern Gothic novel I Am Legend. Although LAST MAN did not do well on its original release, the film's reputation has grown over the years--it may be the best cinematic adaptation of Matheson's work.

The third disc could be called the "sequel" disc, since it has two follow-ups to Vincent Price's most famous films. DR. PHIBES RISES AGAIN is of course the continuing adventures of Dr. Anton Phibes from THE ABOMINABLE DR. PHIBES. It is not as impressive as the first Phibes film--but seeing Price in his (in my opinion) best role is a treat. RETURN OF THE FLY is a very low-rent sequel to the far superior THE FLY. Why RETURN OF THE FLY is on this set is a head-scratcher--the movie isn't even in color, and Price has very little to do in it.

The fourth disc has the legendary HOUSE ON HAUNTED HILL, Vincent's first teaming with the great showman William Castle. The rest of the disc is filled with various featurettes on Price's life and career. There's also another 32-page booklet written by David Del Valle, which is filled with pertinent information and stories about Price.

Just like the first Shout Factory Vincent Price set, this one has tons of extras--new audio commentaries, still galleries, trailers, featurettes, etc. (I still haven't gotten to all the extras on the first Price set). All of the films included here have been released on DVD before, most of them on the famed MGM "Midnite Movies" label. At least Shout Factory has gone out of their way to make sure buyers get something more than just the movies....let's face it, if you are a Vincent Price you more than likely already have these titles on home video.

With the exception of THE TOMB OF LIGEIA (which I will discuss on a separate blog), the movies look rather impressive on Blu-ray. HOUSE ON HAUNTED HILL has been out on various public-domain discs for a while, but the Shout Factory Blu-ray version blows the other ones away. A few reviewers on the internet have mentioned that the film selection for this box set could have been better. Having three black & white movies on a Blu-ray box set, when there are so many Vincent Price color titles that could have been chosen, is the first thing that comes to mind. (And why not THE FLY instead of RETURN OF THE FLY?) I assume that Shout Factory will put out other Vincent Price Blu-ray sets--here's the titles I'd like to see on the next one:


MASTER OF THE WORLD
TALES OF TERROR
WAR GODS OF THE DEEP
SCREAM AND SCREAM AGAIN
MADHOUSE
THEATER OF BLOOD
Posted by Dan Day, Jr. at 8:17 AM