AT THE EARTH'S CORE On Blu-ray 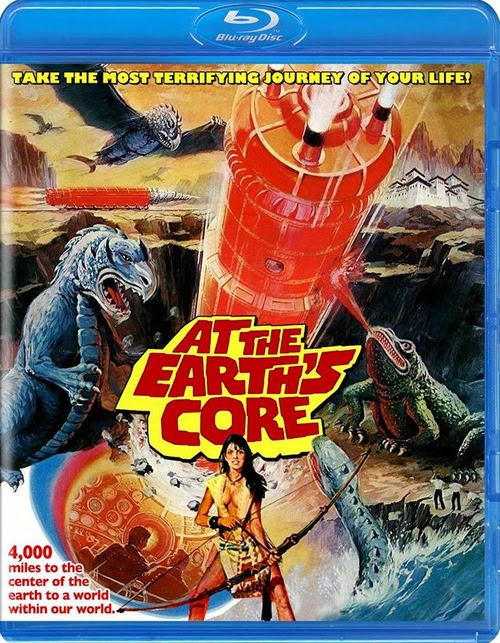 Kino Lorber has released the 1976 science-fiction adventure movie AT THE EARTH'S CORE on Blu-ray. The film is based on a novel by Edgar Rice Burroughs, and stars Doug McClure, Peter Cushing, and Caroline Munro.

This Amicus production was a follow-up to the company's successful release of THE LAND THAT TIME FORGOT, which also was based on a Burroughs novel, and also starred Doug McClure. In this movie, set in the late 19th Century, American David Innes (McClure) and eccentric scientist Dr. Abner Perry (Peter Cushing) pilot a gigantic mechanical drill into the very depths of the earth, where they come across a subterranean land known as Pellucidar. While there David and Dr. Perry meet the beautiful Princess Dia (Caroline Munro) and save her people from numerous strange creatures.

AT THE EARTH'S CORE is very much an old-fashioned family fantasy adventure. The movie works better if the audience watching it has a lot of imagination and very little cynicism. Most of the "Beasties" (as Cushing's Dr. Perry refers to them) are portrayed by men in suits, and they all look very rubbery. If you can accept the monsters, and not wonder how someone can live underneath the Earth and look as gorgeous as Caroline Munro, or wonder why all the human natives of Pellucidar speak proper English, you will be able to enjoy this film. The main reason the story does work is that there is no irony or sarcasm to it--if this film had been made today, the tone of it would be totally different.

What makes AT THE EARTH'S CORE special for Peter Cushing fans is that his Dr. Perry is somewhat of a comic role. Cushing makes Perry as jittery as possible, and he pulls off some facial expressions that you would never see from him in most of his usual roles. There are some Cushing fans that feel the actor was broadly overplaying. I look at that opinion this way--after seeing Cushing play the dedicated, determined scientist dozens of times, it is a welcome treat to see him put a humorous spin on such a role. Besides, it's quite clear that Cushing had a lot of fun doing this movie, and at this point in his life, he needed all the fun he could get.

The Kino Lorber Blu-ray of AT THE EARTH'S CORE presents the film in 1.85:1 anamorphic widescreen and in DTS Mono. As expected the movie looks and sounds far better than the old "Midnite Movies" DVD of this title. Kino includes some interesting extras, such as a 28-minute interview with the delightful Caroline Munro. Caroline is a fantasy-film legend, and she goes over her appearance in AT THE EARTH'S CORE and various other highlights of her acting career. There is also a 22-minute interview with AT THE EARTH'S CORE director Kevin Connor. Connor became Amicus' un-official house director in the mid-1970s, and he discusses many of his horror and science-fiction movies. Connor also is featured in an audio commentary, which is rather disappointing, because moderator Bill Olsen barely allows Connor to get a word in (and because Olsen constantly steers the conversation away from the movie they are commenting on). There is also a trailer and a vintage featurette on the film's many practical effects (which appear rather clever compared to all the CGI of today--the model of the giant drill is a fantastic piece of Steampunk technology).

AT THE EARTH'S CORE may not be on the Ray Harryhausen level, but it is all in good fun, and any self-respecting geek has to admire a film that co-stars Peter Cushing and Caroline Munro.
Posted by Dan Day, Jr. at 6:21 PM