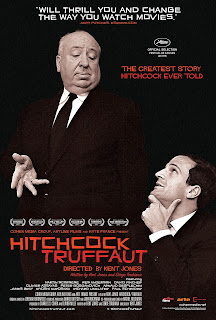 Earlier this week I took the opportunity to attend a screening of the 2015 documentary HITCHCOCK/TRUFFAUT. The film was shown at the Browning Cinema on the campus of the University of Notre Dame.

HITCHCOCK/TRUFFAUT is also the name of one of the most famous books ever published concerning cinema. The book was based on a series of interviews between Francois Truffaut and Alfred Hitchcock that were held in 1962. Truffaut was one of the most renowned members of the French "New Wave" of writers and filmmakers who felt that certain elements of popular Hollywood cinema were not given enough critical respect. Truffaut hoped that the book would help elevate Hitchcock to the status of a true artist instead of just a famous movie director.

I personally own several books on Hitchcock and his films, but I have to admit I do not have a copy of HITCHCOCK/TRUFFAUT (I did, however, order one off of Ebay after seeing this film). I feel that I am still familiar with it, because ever other Hitchcock book quotes from it extensively, and the extras and commentaries for any Hitchcock film on DVD or Blu-ray refer to it as well.

The documentary starts out with some personal background on Hitchcock's early life (with footage from the director's own home movies), and contrasts this with Truffaut's background. The origins of Truffaut's idea to interview Hitchcock are explored, and much audio from the actual tapes of the interviews are used. (While listening to these audio snippets, I couldn't help but think that Hitchcock was still "being Hitchcock"--in other words the director was still playing the carefully crafted public role he had created for himself.)

The documentary is enlivened by numerous scenes from Hitchcock's films. Many of these moments will no doubt be familiar to film buffs and fans of the director, but a few of Hitchcock's lesser-known works are thankfully spotlighted as well. An extended part of the documentary focuses on VERTIGO, but for those who are obsessed with that movie such as myself, that is not a problem.

A number of today's most acclaimed filmmakers are given a chance to discuss and analyze Hitchcock's oeuvre, including Martin Scorsese, Wes Anderson, and David Fincher. Their opinions are fascinating and thought-provoking, and their appreciation for Hitchcock reinforces the fact that the Master of Suspense still affects film making to this very day.

The fact that this is a film about a book about a film director proves just how influential the collaboration between Truffaut and Hitchcock really was. One would think that by now, there was nothing new or enlightening to say about Alfred Hitchcock and his films. One of the definitions of a great artist, I believe, is that the artist's work can always seem fresh and interesting, and it can always be interpreted and looked at in new and various ways. Alfred Hitchcock certainly fits that definition, and Francois Truffaut was absolutely right in recognizing Hitchcock as a great artist. I own most of Hitchcock's films on home video, and I've seen most of them dozens of times, but after seeing this documentary I felt compelled to see them all again. That alone proves the merit of HITCHCOCK/TRUFFAUT. If you have any interest in Alfred Hitchcock whatsoever, you owe it to yourself to see this film.

HITCHCOCK/TRUFFAUT was produced by the Cohen Media Group, and was co-written and directed by Kent Jones. The film is narrated by Bob Balaban.